In this post:
http://iloapp.thejll.com/blog/earthshine?Home&post=268
I pointed at the unwanted structure in the sky near the lunar disc in an image that was Bias-reduced as well as had had its halo removed. Bias problems were ruled out – and left was a speculation on internal reflections in the camera system.

If we are truly left with that horrible structure on the sky we cannot just remove the halo in the present way, as the method depends on ‘fitting the sky’. If there are basins and hills in the ‘sky’ the fit will be bad – if the halo subtracted has the right shape but not the right ‘level’ then perhaps we can think of a fix: After removing the halo, but before extracting photometry from the DS disc in the image we can reference the sky adjacent to the DS and offset our disc value from there.

I tried this, by estimating the sky level on a part of the sky near the DS on an image where the halo has been subtracted, following the EFM method:

The two patches on the lunar disc are the Grimaldi and Crisium reference patches (DS and BS, respectively [although the BS value is estimated from the same pixels in the raw image]) and the large semi-rectangle on the sky next to the DS is the ‘skypatch reference area’. We calculate the average value of that patch and subtract it from the value extracted for the DS. If the error is of an offset type, rather than a slope type we have then corrected for the halo misfit.

To see the effect of this problem we estimated the DS/BS ratio in all EFM-cleaned images, for each filter, with and without referencing to the sky level:

As usual, the jpegs above are poor in quality so we also post the pdfs:

Each panel contains three columns – the rows are for filters. The first column is the DS/BS ratio as function of lunar phase (Full Moon is at phase 0). The second column is the ratio of the DS and the total RAW image flux [for reasons explained elsewhere!]. The third column shows the ‘alfa’ value derived by the EFM method.

Almost the same list of images were used for the two plots above – note the differences by inspecting the alfa plots – crosses are present in one plot but not the other one.

We see that the sequences of points for the case ‘skyptach reference level removed’ are slightly fuzzier than the sequence where the reference is not subtracted! Before we can interpret this I think we need to restrict the two plots to the same set of images – I shall do this and return …

[later]: This has now been done. For the IRCUT filter (341 data points) we show the effect of skypatch-referencing on the DS/BS ratio expressed as obs/model: 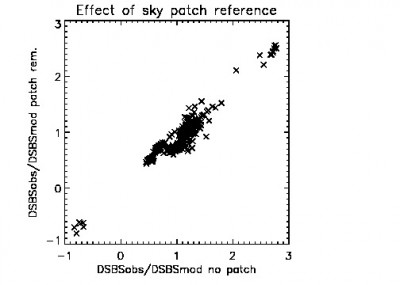 First we notice the wide span in DS/BS along both axes – this is not new: this is mainly the phase-dependence we see – this is MUCH LESS than would be seen for BBSO-method treated images, and is not the point – the point is that the spread along y for a given value of x – say near x=1 is something like 50%: That is – the effect of removing the sky-level from the DS value, in EFM-cleaned images, is to alter the DS/BS ratio by 50%. This means that the EFM-method did not do a very good job of removing the halo. It did remove a lot of the halo – but clearly not so much that a considerable effect is felt when the small remaining offset is removed.

This is important for our Science Goals: On the one hand we see the EFM method work much better than ‘BBS linear’ and ‘BBSO log’ methods in removing the effect of phase on the DS/BS ratio [shown elsewhere in this blog], on the other hand we see it does not do a sufficient job.

We should note that the BBSO linear method removes the sky level in one step (since it is a fit to the sky near the DS) but that, being linear, it does a poor job of removing the halo where it matters most – on the DS disc. The EFM method may be much better at removing a halo of approximately the right shape – but there remains a bias that is important.

The current EFM method is not ‘anchored in the sky’ – it merely seeks to minimize the residuals formed when an empirically generated halo is subtracted from the observed image – as evaluated on a masked section of the sky part of the image. There are choices made when that mask is set up, and they are:

a) The mask used above was such that sky was included on both sides of the lunar disc, set off from the disc by some 20 pixels and curtailed vertically at 0.7 radii (so that a ‘band across the lunar disc, but not including the disc’ is set up). This gave weight to both the part of the halo on the BS and the DS.

b) The mask is quite large to give access to a large number of pixels so that the effect of noise on the fitting-procedure was reduced.

The requirement in b) forces the choice in a) to be so large that any unevennesses in the sky (such as we suspect occurs due to internal reflections when the Moon is near the side of the image) has an influence on the quality of the fit, forcing the above consideration of a ‘special removal of the sky level near the DS’. To this comes the problems of allowing the BS halo to influence the fit.

We should investigate how we can improve the EFM method. Possibilities include

1) spatially weighting pixels so that ‘difficult areas’ are avoided or are given less influence on the final fit – such as the bothersome BS part of the halo.

2) use much smaller areas to fit the halo on the DS to – such as a patch near the DS patch on the lunar disc. This has to be balanced – on the one hand we get more influence of noise (which influences the BBSO method too, as it uses ‘narrow radial conical segments’ on the sky), but on the other hand we eliminate the effect of the BS halo as well as the ‘unevennesses in the sky field’.

3) One hybrid form of the EFM, tested earlier, consisted of enforcing that the model halo should be flux conserving (as now) and at the same time pass through an average point on the sky near the DS in the observed image.

We should implement a method that does not show the above sensitivity to removal of a sky reference level calculated on the already cleaned-up image. Access to a system without these internal reflections would also be nice. One significant step to take before that could be to find all images without the ‘streak’ effect that lead to the above considerations.