We have generated ‘super flatfields’ by considering all the flat fields we have – we have many exposures through each filter taken on sky, the dome inside and the hohlraum lamp. While the patterns are the same for the three types (mainly a roof-tile like diagonal pattern’ we have dips in the corners of especially IRCUT and VE2 (and VE1). It is therefore not obvious which flat field is the ‘correct’ one. Assuming that the ones with the least vertical relief must be the ones closest to reality we have adopted one superflat for each filter.

We need to investigate if there are other ways of testing which FF is best – and we have the possibility of ‘scamp’ and ‘sextractor’ to generate background fields, which we assume are some sort of smoothed residual after sources are removed. Using frames from NGC6633 we generate these background fields from ‘raw’ frames and ‘bias-subtracted and flat-divided’ cluster images.

A sample of the background fields, shown as contour plots, for one science frame is shown here: 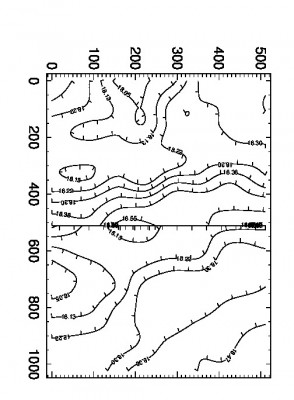 The upper field is for ‘raw’ and the lower for ‘bias-subtracted and flat-divided’. The contours seem to have a mean near 18 for both – the contours evidently are not the same. The differences between the two backgrounds amount to 0.1 – 0.2 counts.

We should center the backgrounds on sky-coordinates and average and see if the fields are consistent given method (we assume so). TBD.

If the patterns are stable we have learned that applying bias-subtraction and flat-division can alter the levels by a few tenths of a count. This may be important for photometry of the DS. Presumably it is better to correct for the flatfield than not to, but that depends on whether the flat-processed fields are consistent. Perhaps warp can be used to generate a stacked field, and its background?

Added later:
Doing just that we get the average background frame for ‘raw’ and ‘bias-subtracted, flat-divided’ processing: 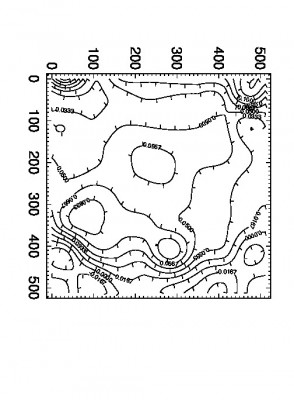 The effect is regional inside the frame and so we can well have an effect on the limited-region fittings we perform on the DS.

Might want to consider what the effect on the BS-halo, evaluated at the DS, is if the BS also has flatting-effects brought to it.

Basically, applying flats are necessary as long as they do not bias results due to bad production of the flat-field itself.