We have been following the mystery of the VE2 filter. Ana Ulla asked a good question: “Do you see the same problems in images not of the Moon?”, so I checked that, using our copious collection of Altair images. I fit a Moffat profile to each well-exposed image of Altair and extracted the sky level. I plot it here as a function of which filter (0=B, 1=V, 2=VE1, 3=VE2 and 4=IRCUT) and as a function of time, for one night (JD 2455845): 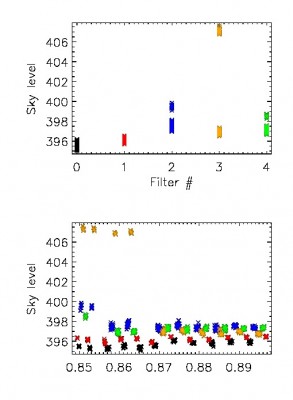 In the top panel we see that VE2 (the brownish points) have two levels, and in the lower plot we see that the VE2 level switches from high to low after some time. (Bottom panel has fractional day as x-axis). We also see that the black points (B) increase their level (slightly) at the same point (0.87) where VE2 drops to the low level. Blue points (VE1) have some history like that too. V (red) is quite stable. Green is IRCUT.

If the excess in VE2 (and others) was due to a source of light, then we would hardly see a down-shift in the level. Ana’s idea was that thin cirrus could enhance the nIR band of VE2 (quite like the Johnson I band) – but that does not explain why B rises, unless that is a particular behaviour of cirrus clouds, which I doubt. I do not think anything above is consistent with a light source. I think this is what we have had to conclude from the other results presented in this blog – e.g. the inverse exposure time dependence and the inverse airmass dependence.

I am guessing when I say that I think it is something to do with electronics. The camera knows which filter is being used! (Not).