A central tool in both our and BBSO’s analysis methods is the understanding of the lunar reflectance since it relates the observations to fluxes from the Earth and ultimately the terrestrial albedo. BBSO has measured and determined their own lunar reflectance function. Until now we have been using the Hapke 1963 reflectance model.

Kieffer&Stone 2005 have a reflectance model suitable for phases between Full Moon and Half Moon – these are based on terrestrial ROLO observations of the Moon.

From space SOLSTICE has imaged the Moon at lunar phases to 170 degrees and they show a preliminary reflectance function.

We compare now the irradiance expected from the Moon at a range of phases given our own eshine code (i.e. based on Hapke63), and the Kieffer&Stone model as well as the LLAMAS reflectance from SOLSTICE. The curves have been scaled vertically to coincide at intermediary phase angles. 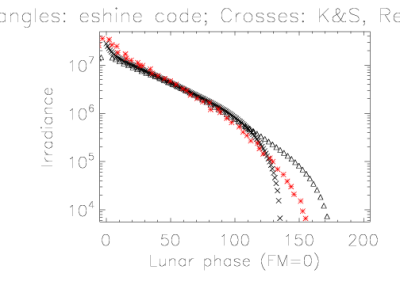 We see some disagreement on what the slope is as a function of phase for intermediary values, and large disagreement at large phases. The Hapke63 and LLAMAS values strongly disagree at phases from 120-170 degrees.

That is the phase-range in which we currently are limited to work (since the SKE does not work), so we have an issue related to data interpretation. I think what we see here explains why the Lambertian albedo we derive for Earth for lunar phases near New Moon can be above 1, as noted elsewhere in this blog. It is because the Hapke63 model gives a lunar irradiance that may be 2-3 times greater than the observed (LLAMAS) value for relevant phases. In the FFM method we scale the DS intensity to total flux in observations and synthetic (i.e. Hapke63-based) images and with synthetic irradiance exaggerated by so much the ratio to DS flux is low in synthetic images and we have to compensate by driving Lambertian albedo up.

So, we understand stuff!

For better use of the synthetic image code we need to implement a more realistic reflectance. Since LLAMAS data are only preliminary we have to wait for them to publish a full wavelength- and libration-dependent model. In the meantime we could perhaps roughly scale the Hapke63 reflectance – or something like that?

BBSO is somewhat ahead of us here, as they have derived their own reflectance model. We do not have resources to do that currently, although we have plenty of data to do it with. It is a suitable student project (PhD) or even work for a postdoc.