The Moon was observed going through the ‘Rainbow angle’ on Dec 21 2011. Observation started at Moonrise and stopped at sunrise a few hours later. All filters were in use and good exposures were obtained with minimal dropouts due to shutter stick.

Bias was subtracted and the scattered light removed using the BBSO method. The total counts for a 23×23 pixel box on the DS was extracted in each image as was the image total flux. The ratio of the total flux to DS box is plotted in the figures above in the upper panels. DS box and total are plotted below. To the left are the results when scattered light has been removed; to the right when it hasn’t.

The step up in total flux near the start is due to adjustment of the exposure time used.

The increase in scatter that appears to occur when scattered light is removed may be quite realistic as the total/DS ratio will be more stable when the DS total contains an (erroneous) contribution from as-yet unremoved bias or sky levels. When these contributions are removed the true scatter of the DS data becomes evident. Note that, e.g. the cyan points lie on a straighter sequence in the corrected image than in the uncorrected implying variability in the scattered light, which was quite realistic for that night.

The observed downward trend in the total/DS ratio is consistent with a gradual increase in earthshine intensity.

The sequence of observations started as the Rainbow angle had already been met. The Moon moved from red to blue side of rainbow.

We next add the expected evolution of the Earthshine intensity for this night. We use the synthetic model and generate models for the ‘cloud-free’ case – i.e. The Earth has no clouds but does have surfaces with different albedo: land, ice, water – and the ‘uniform’ case whjere Earth is just a Lambert sphere with a phase function. 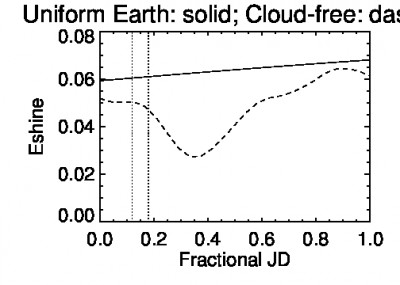 The solid line shows the evolution of Earthshine intensity for a Lambert sphere; the dashed line shows for a cloud-free Earth. The two vertical dotted lines delineate the observing window. The large dip correspnds to the (cloud-free) Pacific ocean.

We see that Earthshine is predicted to increase during the observing session if the phase-function rules – but decrease if the surface albedo rules. 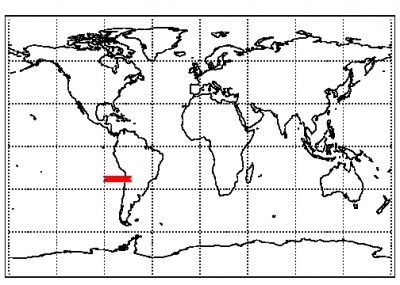 We can use the modelling code to make a map of the areas that contributed to the earthshine at the moment of observation. 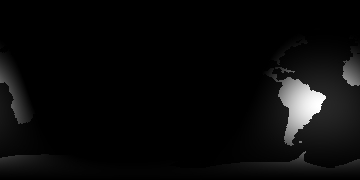 This map corresponds to UTC 1 hour on that day. As the sunglint moves further West the dark Pacific comes to dominate the average albedo.

It is quite possible thatthe Pacific was not cloud free at these times and therefore helped to increase the average albedo. From http://goes.gsfc.nasa.gov/goeswest/fulldisk/vis/ we can download full disc images from the GOES West satellite at 3 hour intervals. 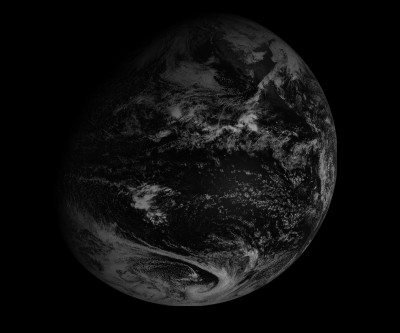 USA is at upper right. South-Eastern apcific at lower right – Sun is just rising on Hawaii ner athe middle of the image. While therea re some large swirls of clouds in the South Pacific it does not seem to be enough to cause the growth in average albedo observed. A quantiative calculation would have to be performed.

Summary: We have observed a decrease in the total(DS ratio which implies a rise in the DS intensity – i.e. increasing Earthshine. We have shown that Earth’s phase function was growing at the time and thus contributing more light to the DS of the Moon, but we see that the rotation of the Earth is bringing darker areas into view thus counteracting the phase-function tendency.