I have run simulations like Peter’s of our ability to recover a changing albedo with time.

The sims are over a period of a decade with 100 observations of (global) albedo per year (randomly chosen nights). 1000 sims were run and the slope of the albedo change with time measured using least squares from the monthly means. One sim was for no change in the average albedo with time, the other for a linearly incrasing albedo with a slope of 0.1 percent of the albedo per year — i.e. mean yearly albedo increases from 0.300 to 0.303 over a decade.

It’s important to start each sim on a different day of the year — if not, there is a bias in the slope caused by the seasonal pattern being the same in all sims.

The plot shows the histograms of the slope determinations. 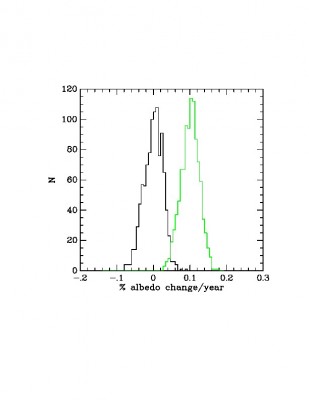 Black histogram: no change to the mean albedo with time. Green histogram: change of 1 percent over a decade – i.e. 0.1% per year.

The natural variation in the albedos was set at 1 percent in addition to the seasonal variations.

The histograms are centered on the correct slope — but the width of the histograms is quite broad and backs up Peter’s sims of last week and reported in the blog.

This setup (10 years, 100 albedo measurements per year, 1% natural variation in the albedo) gives a 4-sigma detection of a rising albedo of 0.1%/year

One Reply to “Error on determination of linearly changing albedo”