Showcase images and animations Posted by Peter ThejllPosted on Oct 26, 2011 15:35

The reflection of the Sun travels across the Earth as seen from the Moon. Since a majority of the earthshine originates near the sunglint it is of interest to map the position of the sunglint.

Below is a map of the footprints of the sunglint for all observations we have so far, from Hawaii. Since almost all the observations are morning observations the sunglint is East of Hawaii and has travelled across South America, Mexico and even North America (the last one may be an error and relate to observations of the Moon from Lund). 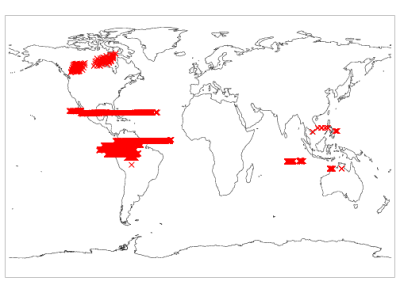 A few evening observations have been performed and they correspond to sunglint positions in the Indian Ocean, South-East Asia and Australia.

Close parallel tracks are separated by one day.

On the map below I show all the sunglint positions for the year 2011 – at half-hourly intervals. Times are selected for the Moon being up and the Sun being down. Blue points have Moon’s illuminated fraction less than 25% – i.e. acessible with the CoAdd technique. 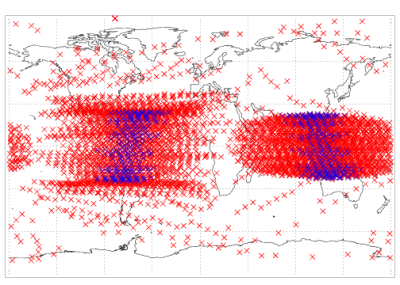 The assymetry between the two ‘patches’ is not yet understood by me.