The Moon is not observable all the time from a single observatory, all year round. To get complete – or almost-complete coverage we ask: where should the earthshine telescopes in the network be placed? The plot below shows, with coloured symbols, when the Moon is observable (defined as Moon up and Sun down), for 5 observatories around the world. MLO is Mauna Loa, MSO is Mount Stromlo in Australia, LCO is Las Campanas in Chile, SAAO is South African Astronomical Observatory. The underlying curve shows the earthshine intensity for one month. The Earth was modelled as a cloud-free sphere with bright continents and dark oceans – hence the zig-zag nature of the curve. Addition of randomly placed clouds would tend to dampen the amplitude of the zig-zags by about a factor of two. 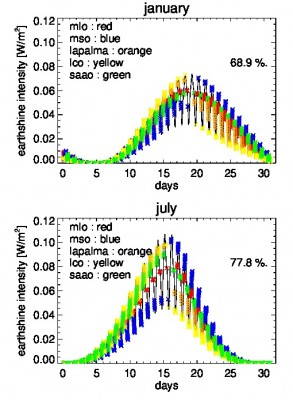 When the underlying curve is not covered by coloured symbols it means that the Moon is not observable from any observatory. We note that this happens particularly when the earthshine is intense – that is near Full Earth, which is New Moon. This is clearly because the Moon is almost never in the sky alone when it is New (it has either risen shortly before the Sun, or will set soon after the Sun). Observability is best near Full Moon (New Earth) near day 15 – but then observing earthshine accurately is very difficult.

On average a single observatory experiences the Moon above the horizon and the Sun below, 25% of the time. Given the choice of these 5 observatories the total observability depends on time of year – given in the panels.

Clouds and the need for the Moon higher in the sky cuts the observability.

The above simulation is for two months of the year – the declination of the Moon changes with the seasons so the relative contribution by each observatory changes with time.

One Reply to “Observatory choice”