Peter and Chris took images of the sky near the moon, going outwards from the Moon in 0.5 degree steps, in order to measure the powerlaw falloff of light using the MLO telescope.

WCS coordinates for the frames were found using astrometry.net. This is a great site!

Stars in the fields were found by searching Simbad for objects brighter than 10th magnitude. A small program was written to locate these stars and do the photometry based on the magnitude equations determined previously for the CCD, and their J2000 coordinates. This is quite nicely automated now. Bias frames were subtracted from each of the images and the magnitudes and sky flux of the known stars in the field computed. The magnitudes were compared to the known magnitudes and came out very nicely.

Some example images with stars of known magnitudes:
POS6: 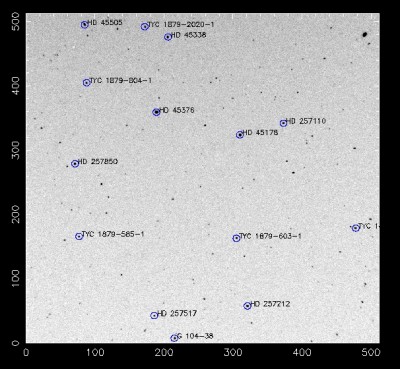 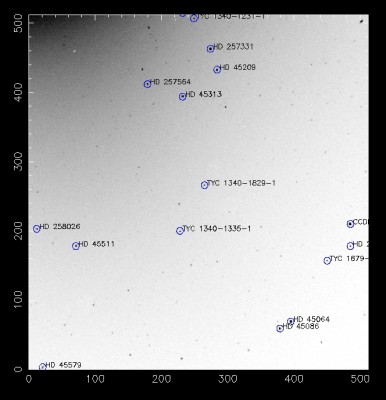 Distances from the center of the moon were computed for each star, and the sky flux next to that star plotted as a function of Lunar distance on a log-log plot. 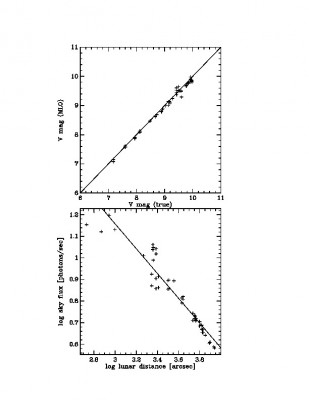 PDF version of this plot:

Upper plot shows the magnitudes of the stars found in all four fields versus their correct magnitude. Lines is the 1:1 relation.

Lower plot shows the brightess of the sky versus the distance from the Lunar center in log(arcsec).

For the present this is a cosmic puzzle!

Improved coordinates of the Moon were computed from the times of the exposures by Peter and a better plot results. Here it is: 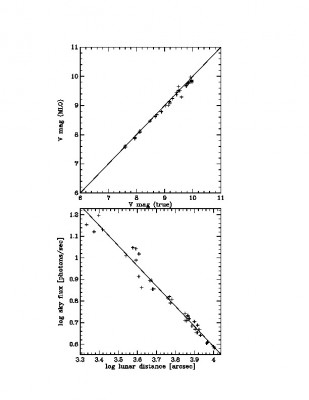 Slope of the halo is now -0.9. That’s a bit better. More work to be done on this at the next full moon.

2 Replies to “Scattered light from Moon measured at MLO”