Since the setting of the colour filter (as well as the shutter) was unreliable we must find a way to detect which images are taken through which filters. 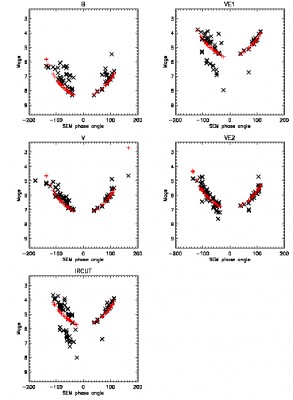 Total lunar Fluxes plotted as magnitudes against the lunar phase (New Moon is at 0). Bright is up, faint is down.

The data for each image (black symbols), here expressed in magnitudes, are overplotted with a phase law (red) inspired by that in Allen “Astrophysical Quantities”, except we modify the coefficients in that and use instead:

Notably the coefficient on the linear term is about half of what Allen specifies.

Particularly in VE1 we note the presence of two sequences of data. We have ‘fitted’ (by eye) the sequence that is represented on both sides of the new moon to the Allen phase law. The orphan sequence is below the adopted data suggesting that a filter with less transmission was obtained here when VE1 was requested.

For B it seems that intermittency causes some fluxes to be higher, but they do not fall in a delineated sequence so cannot be identified with a filter.

The V filter seems to have the same problem, although less so.

VE2 is also somewhat ‘broad’ in its distribution.

The VE1 and IRCUT filters are extremely similar in transmission properties and are quite similar in the plot above, including the presence of the ‘second sequence’.

The ‘second sequence’ is quite similar in flux to the V observations, and it is consistent to say that when IRCUT and VE1 failed to be chosen V was obtained instead.

This seems to also apply to some of the outliers in VE2 and B.

We thus suggest that a working hypothesis for the failure of the filter wheel is that when it failed the V filter was selected instead.

We next proceed to eliminate the outliers in each filter so that a dataset can be defined which will allow identification of the extinction laws in each filter. With that in hand it may be possible to ‘tighten up’ the data and move towards a ‘golden dataset’ from which also DS fluxes are worth extracting.

The presence mainly on the left side of the diagrams of a ‘second sequence’ of data implies that something like a mechanical problem is behind the FW failure – because the telescope is flipped over the meridian to observe mainly in the East or the West depending on whether the Moon is rising or setting (before or after New Moon).

One Reply to “Fluxes vs phases”