As discussed here, the CCD camera became twisted in its thread on the telescope at one point. The problem was fixed, but this means that some of our images have a slight rotation about the frame mid-point. This influences the success of subseqeunt data reduction steps: especially the steps that depend on extracting flux from specific areas on the lunar surface.

We therefore tested for the presence of a rotation angle by correlating a synthetic image made for the observing moment with each and every observed image, rotating the synthetic image until the correlation was maximum – in 1 degree steps.

We plot the detected best rotation angle as a function of image sequence number and date: 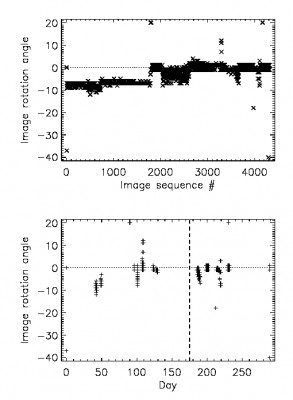 The CCD twist was correctd by Ben on JD2455991, and this datum is shown as a vertical dashed line in the plot above. Since this is not consistent with the angles measured we have to say that the test so far has been inconclusive!

Actually, it was not impossible to inspect the relationship between model images and observed images visually and to confirm when an obvious image rotation was present. Partial results (note: more points than above) look like this: 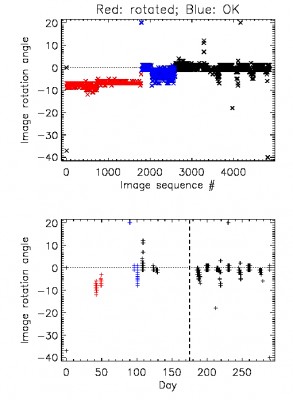 Here color coding indicates in red the images that so far obviously have a rotation problem, and in blue images that show no obvious problem.

The presence of blue symbols at large rotation angle must be due to failure of the algorithm for detecting rotation! It is not an easy problem to solve – at New Moon there is precious little to correlate images on, unless the DS is used – but the presence of the halo gives problems, so that histogram equalization is not an obvious remedy.

A fixed derotation for the detected nights could be implemented – this affects some of the early observing nights where single images were taken (not stacks).

As a working hypothesis, let us assume that all images before 2455886 must be rotated by something like 6 or 7 degrees, to bring them into good alignment with their synthetic models.