Some thoughts on the DSCOVR Moon/Earth picture

NASA recently released a set of images showing the Moon crossing the disc of Earth, as seen from the DSCOVR satellite orbiting Earth in the L1 Lagrangian point. From that point the satellite can keep constant watch on Earth, with the Earth disc always fully lit. 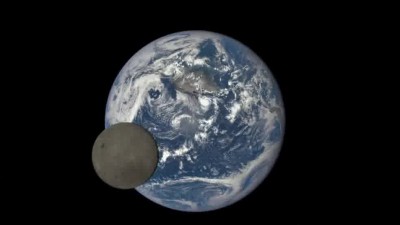 NASA image, from the DSCOVR satellite.

This image is interesting because it brings together so many different pieces of information, and possibilities. With the Moon an unchanging object (surface cratering might change on timescales of 100s of millions of years) in the same frame as Earth it becomes possible to very accurately calibrate photometry of the Earth.

Why do we need good photometry of the Earth? Well, weather satellites already give us a flood of images of Earth, but the images – especially from older satellites – are mainly suited for weather forecasting – “Here is a cloud mass, and it is moving this way, so we think it will rain or be cloudy at such and such a place a little later”. This sort of information is of enormous value to society on a day-to-day planning basis, but for climate research the data have to be absolutely calibrated – in other words, it is no good if the pretty pictures of Earth are taken with different instruments that have different sensitivities, or with instruments that slowly alter their properties. The resulting data would not be inter-comparable.

Climate research needs to have data for Earth that tells the story of what happens over time – this is the difference between ‘climate’ and ‘weather’: Weather is tomorrows’ events, but climate is the mean of what things were like 20, 50 or 1000 years ago. If changes in climate can be detected, then we can start thinking about what causes the change. A lot is known already, but every bit of new, reliable information can be put to good use.

Looking at the DSCOVR images we note the cloud masses on Earth – if you have seen the animated film showing the Moon passing across the disc you will realize that the Earth is turning as we watch – so new cloud masses are being brought into view while others pass beyond the limb of the Earth causing variability in the average brightness of Earth. Link to the animation is here.

Using image-analysis software it is possible to pick out the parts of the image that are Earth and the parts that are Moon, and look at the statistics of the numbers. The images are ‘RGB’ images and each RGB-image contains one image for the red light, one for the green light and one for the blue light. Because the Moon is in the image there is the huge benefit that even if the camera settings or properties varied slightly in time then the ratio between Moon and Earth brightnesses in the three colour bands would be independent of these errors or slow changes.

So, with these wonderful properties of the NASA image, how useful is it, in reality?
The amount of clouds on Earth relate directly to the ‘radiative balance’ that drives climate. More clouds mean less light get into the climate system to warm it up. Therefore, variations in amount of clouds will alter the temperature. We all know it is cooler when a cloud draws in front of the Sun, but over larger scales and longer times, how much will mean temperature change for a given change in cloud cover?

In the NASA image the variations in the clouds seen, due to rotation, amount to some 3% in the short segment of images provided. The images are taken about 15 minutes apart from the DSCOVR satellite so in that short film (containing 12 images with a full Moon disc in view) we cover almost a quarter turn of the Earth. Aha, so we now realize that the amount of clouds on Earth varies by several percent from hemisphere to hemisphere and probably day to day. Next day the amount of variability is some other number and some cloud masses have dissolved while new ones have been formed – so on a daily basis cloud variability on Earth is high. Uncertainty is therefore high, as to the actual number of clouds present – weather forecasting may care where the clouds are and how many there are, but climate investigations need more precise (less scattered) data.

If we average many images of Earth the variability would average out and the uncertainty go down. How many pictures of Earth, like the ones here, would you need to have for the average cloudiness to be of use in the clouds-vs-temperature question?
The answer turns out to be that with about 1000 independent images the average would have an uncertainty of 0.1%.

How do we get ‘independent’ images? The phrase refers to ‘statistical independence’ and has to do with how long you must wait for a fresh cloud-scape to be present over the visible disc of the Earth. Weather systems can last several days so you can perhaps get an independent image of Earth every 2 or 3 days.

It therefore looks like data gathered over a decade could produce data for cloudiness that could be used for investigations into climate change mechanisms via the cloud-mechanism. This answer holds equally well for ordinary satellite data except these data have the added problem of instrument drift.

Of course, the Moon only crosses the Earth’s disc as seen from the DSCOVR satellite every so often – you certainly do not get a sequence of images like the above every day – or Month. So is it useless to use these data for the climate-change purpose then?

Well, all satellites have a basic problem – they do not last long in deep space due to radiation damage from cosmic ray particles and outbursts from the Sun, so they get replaced every several years or so. This will probably also have to be done with the DSCOVR satellite, if there is funding for it. The point I make here is that the presence of the Full Moon in the image frame every so often allows a re-calibration of the DSCOVR satellite instruments that give unprecedented accuracy. Geostationary satellites are between the Moon and Earth and do not capture the Moon in-frame very often, and when they do it is as a small object peeking out behind the Earth in a corner of the picture. These chance-occurrences are, however, used nowadays to calibrate satellite instruments, by EUMETSAT and others. Classically, satellites were calibrated on bright white surfaces on Earth, such as salt deserts – this gives about 1% precision and accuracy, while the lunar methods are able to reach a few tenths of a percent accuracy.

Another comment that can be made based on the NASA image is that the Moon appears dark against the Earth. In principle this is well understood because the lunar soil is dark while Earth is full of bright clouds, icecaps and a scattering atmosphere. Desert are also very bright, but forests are dark, as is the cloud-free ocean. With the images at hand we can readily measure how bright the Moon is relative to the Earth in each of the R, G and B colour-bands. The ratio should give the ratio of albedos (reflectivities) of Moon and Earth, because the geometry is the same – Sun is behind the DSCOVR satellite and both Earth and Moon are ‘Full’ at the time the images were taken. I did this and find a ratio about 2 or 3 times higher than the standard ratio expected. The Moons’ albedo is in the range 0.05 to 0.10 while Earth is near 0.3 so the ratio should be 1/6 to 1/3, roughly, but actually comes out as 0.8.

Why is this? I think there may be two reasons – first of all the back, usually hidden, side of the Moon is brighter than the front because there are more mountains and they are bright. The front has lunar Mare and they are darker than the mountains. Second, we are seeing the Moon under Full Moon conditions here and albedo, or reflectivity, depends on the angle of viewing, just as any surface you look along. Near vertical incidence the lunar soil appears brighter than at other phases. This is known as the ‘opposition surge’ and explains why the Full Moon, as seen also from Earth, appears brighter than at other times – not just because a larger fraction of the Moon is illuminated then but because a lit region simply reflects more of the incident light when the incidence and viewing angle is 0 degrees – straight down and straight back out again.

Why does albedo depend on the viewing angle? Any rough surface has shadows behind boulders and mountains and only when the angle of incidence is the same as the angle of reflection will the shadows be hidden from the observer – looking at a lit and rough surface from another angle and the shadows can be seen, leading to a lowered average reflectivity. The lunar also has small beads of glass and crystalline material which contribute to the enhanced reflectivity during Full Moon. Is there no ‘opposition surge’ for Earth? After all the geometry for Earth and Moon is the same here so a surge for the Moon might also cause brightening of Earth? I don’t know yet – but note the pretty ‘sunglint’ seen in the centre of Earth during the animation.

The images used here are not ‘science grade’ but have been optimized for viewing online so transformation of colours have been applied in order to yield a pleasing and realistic image – perhaps the scaling has caused an offset in the brightness ratios, explaining the large Moon/Earth albedo ratio. The raw science data will be released by NASA later, and consists of 10 very narrow band-pass filters.

We might pause to wonder why all this effort is worthwhile? The answer is simple and has to do with reproducibility of observations – we need to have many estimates of all properties of the climate system in order to understand it fully, and winnow out the erroneous data – a point made brilliantly by Ruth Mottram in her excellent blog sternaparadisaea.net.

As they say on Mythbusters “If it’s not reproducible, it ain’t Science!”

A very clever alternative to watching Earth from Space in order to determine its reflectivity, is to stay on Earth, or near it …, and watch Earth from there – by using Earthshine observations! And the rest of this blog is about our attempts to do just that.