We need a cloud sensor at MLO. It can be used for at least two things – it can gather a record of sky conditions for us that we later can use in selecting the best data – and, in our wild fantasies, it could be integrated with a control system so that it warned of clouds and shut the dome.

I have started some experiments on simple sensors and data-loggers to see what can be done. This is a link to an image of the output from a sensor running in Denmark at the moment.

The system consists of a thermometer-chip (LM335a) and an IR thermometer sensor (LMX90614) both sitting on an Arduino and being read once a minute. The signal is processed further by off-line software and a the plot is generated in IDL.

In general, the air radiates with a temperature that is the ‘air temperature’ but the presence of clouds increases the downward longwave radiation field, and the absence of clouds decreases the downward longwave forcing – this causes the readouts from the two types of thermometers to form a cloud detector via a normalized signal based on the ratio of the two. The day-night cycle can be seen in both signals and is removed by taking the ratio, while the passage of clouds is seen as wiggles.

At the moment the system is just a prototype based on a loosely wired breadboard design, but if it works it can be hardwired as a dedicated PC board and permanently interfaced to an Arduino and packaged as a weather-resistant sensor. It relies for protection now on just some cling film (IR-transparent) and I need to experiment with glass and harder plastics of various sorts. Then I will move it to DMI and operate it from the roof there, and eventually we could move it to Mauna Loa.

I see it at first as being read from a USB port on the Linux machine there, offering up the present type of plots and generating a database for archival use, and only later would we try to incorporate it into a more automatic control system, as envisaged originally. 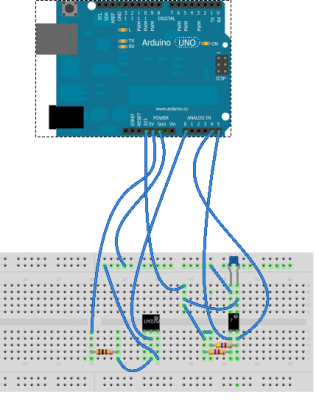