In this post, we noted that there is a daily progression in the obs/mod ratio of the DS/BS ratio itself (let’s call this thing ‘the relative albedo’ from now on!). We speculated as to its origin.

We have now calculated the “relative albedo” with two sets of terrestrial models – one a uniform Lambert-reflectance sphere and one a non-uniform sphere with ocean-land contrast but with a Lambert reflectance, while keeping the set of observations constant. We compare these two sets of results: 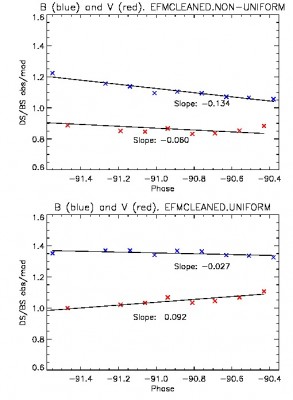 The upper panel shows the “relative albedo” for a non-uniform Earth and the lower one for a uniform Earth. The linear regression slope is printed on each line.

We note that the ‘progression’ for V has changed sign in going from a non-uniform Earth to a uniform earth. The magnitude of the slope on B has changed by 50 %.

We conclude from this that the ‘daily progression’ is due to the terrestrial modelling of surface albedo on Earth.

Or: we can state that we are seeing actual surface albedo variations during a nightly sequence of observations!

During this set of observations (night of JD 2456046) The B-band albedo of Earth decreased slightly, while the V-band albedo rose. This is the albedo of the half-Earth shown in the figures in the post here.

For fun, we plot here the B and V relative albedos for tow nights with overlapping phase intervals: 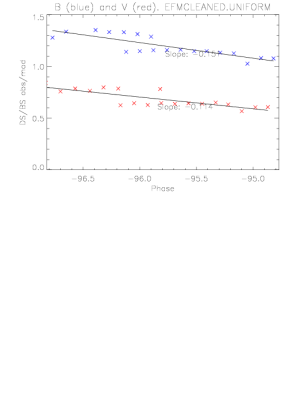 The two nights are 2456075 and 2456016. For the B progressions it looks like there is a difference, at phase -96 degrees of about 0.15 in the relative albedo, and given the scatter of the points we might be able to confidently see a difference 1/10th of that, I guesstimate. That is 1.5% at a given point in phase (that is, time).

If we take the above results at face value we seem to be able to track albedo changes through a night. Averaging sucha progression, in order to get the ‘nightly mean value’ would, of course, yield an average value, and an average can be affixed with a ‘standard deviation of the mean’ which can become very small if you have enough points – and if it gives any meaning to average the points. It does not give that much meaning to average the above progressions since they change on scales longer than our observing sequences.

But anyway, we need to start understanding what BBSO does in their data-reduction. Notably – do they assume Earth is a Lambert sphere? If so, we have perhaps arrived at their “A*” quantity? If, even more, so – we now just need to observe for a few decades!

Given only 1.5 years of data we should for now focus on how we present the results, and how we get something ‘meteorological’ out of the data – as opposed to ‘climatological’. For instance, does the level-difference between nights 2456016 and 2456075 correspond to a change in albedo in the relevant areas of Earth that we can determine from Earth observation data from satellites? More clouds, perhaps? 2456016 is the upper sequence.