We continue the investigation into how well albedo can be determined by looking at justa single image and applying various methods to it.

We compare the ‘old’ method to a new method. The old one consists of plotting row-averaged slices that start on the DS sky and proceed onto the DS disc. We place the slice at 9 different locations up and down the edge of the lunar disc. The ‘new’ method consists of averaging the whole image (and fitted model) into one row by averaging along columns. We do two runs of the old method – varying the distance we go onto the DS, and one run of the new. 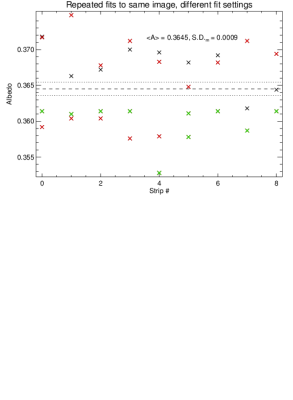 We notice that the green crosses – which are results of identical trials in the ‘collapse the whole image into one row’ method but starting from slightly different starting guesses – all lie below the mean and have some scatter – so the new method is biased wrt the old one and the methdo itself is finding ‘best fits’ that depends on starting conditions. That the convergence is not to the same number each time show that the LMFIT method used reaches a stopping criterion. We have chosen max 500 iterations.

Neither of the above findings are reassuring – fitting method choices determine the outcome. Possibly, averaging over a large number ffo different methods would give us a result that is stable and near the truth.

In summary, we are looking at method-dependent biases of half and whole percentages, and errors of means near 0.2%.

It is not clear if the bias comes from lunar albedo-map and reflectance-model choices, or are stochastic in nature. THe effect of stochasticity is seen from the green crosses where all things are fixed, except the starting guess for the iterated model-fit.