Henriette has shown that there is a bias in the EFM method (on one synthetic image corresponding to one lunar phase with one setting of alfa).

To understand this – and to ultimately understand how to avoid the problem – we perform some tests on synthetic images.

First I compare the intensity of pixels in two images – one image is a synthetic image and the other is one generated by folding with a PSF with alfa=1.6 and 1.8). No noise is added. Plotting all pairs of pixels from the two images against each other we get: 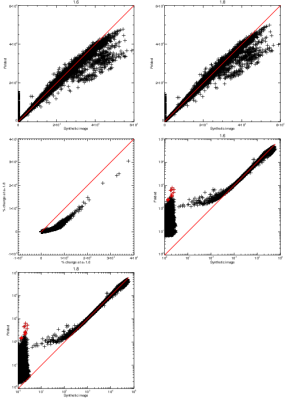 In the upper left panel we compare pixel intensities in the original synthetic image with the same pixels’ intensities in the 1.6-folded image. To the right in the upper row we see results for 1.8. We note that bright pixels have moved to the right side of the red line indicating they have been weakened in intensity; we note that pixels with originally very low intensities have increased and we note that intermediary pixels have suffered both fates. The panel to the left in the middle row shows the percentage changes in pixels from image 1 and 2 in the row above and we see, as expected, that folding with 1.8 lessens the intensity less than if using 1.6 and this is of course because the 1.8 PSF is narrower than the 1.6 one and thus influences fewer pixels at the further parts of the DS. In the rightmost image in the middle row, and the last image at the bottom, we repeated panels i and 2 but now on a log scale to more clearly show the faint end of the sequences. We have also coloured in red those pixels that in image 3 suffered a larger change in intensity than 1.000%; these are all pixels at the faint end – probably pixels on the DS right next to the BS which had their intensities enormously increased when the halo spread out.

The above result was for single pixels. We next investigate what happens to the mean intensities in squares placed across the image at various places and compared between the two images. 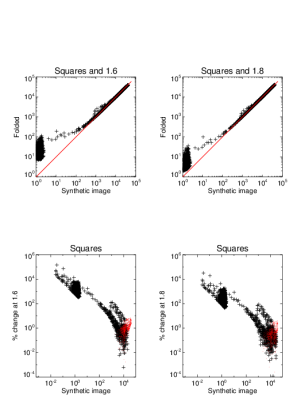 Boxes that were 7×7 were placed randomly all over the images and mean intensities extracted. Upper row shows the original intensity vs. that found in the folded image, for alfa=1.6 and 1.8. Bottom row shows the changes of those boxes’ intensities in percent of original value (except 0 values). Red dots indicate negative values folded up to be shown in this log-axis display. We see what we expect – large means suffer the least; low values suffer the most.

The above results help us understand what happens to intensities in folded images. We also understand that if the halo is not completely removed from the DS then the DS may be left with a positive residual flux. We also clearly understand that if the BS is used as the reference than it will always be an underestimate of the true BS intensity in real observed images – by on the order of 1%.

The answer is – about 80% – that is if the BS was in error (compared to the correct value) by 1 percentage point at alfa=1.6 then it may well be in error by about 0.5 percentage point (compared to what is true) when alfa is 1.8. That is – the influence of nightly variations in the PSF (say from 1.6 to 1.8, which is realistic) may cause the DS/BS ratio to vary by 1/2 % solely by the influence via the BS – never mind what problems we may have on the DS under such seeing changes.

As far as I know the BBSO does not address this problem. It is not a problem that is resolved by ‘extinction corrections’ since these always apply to all pixels in an image equally (apart from the field size issue).

Does using ‘the total image flux’ work? Chris has in this blog analyzed what happens to the total flux when an image is convolved with PSFs of various alfas. We revisit those results now: 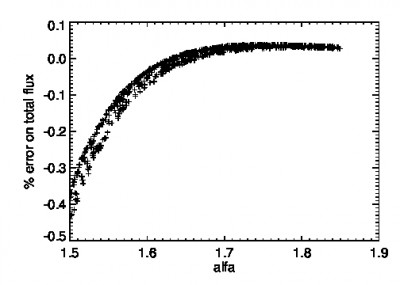 For a large set of random values of lunar phases a synthetic image of the Moon was generated. It was folded with a PSF with a random value for alfa between 1.5 and 1.85. The total flux of the original image and the folded image was then calculated and the difference converted toa percentage of the original total flux, and plotted above. Even if the PSF is flux-conserving the flux is not conserved for small values of alfa (broad PSFs) because the flux in the halo starts reaching the edge of the 512×512 image frame and is lost. The results above show that for all lunar phases the flux is conserved inside the +/- 0.1% limits for alfa larger than 1.57 or thereabouts. Such a small value corresponds to a fairly bad night so as long as we stay to good nights we can count on the total flux in the image being conserved.