One of the limitations we realized then was that image resolution influenced the results from the Laplacian edge signature – the more the edges of the image are smeared the lower the Laplacian signature estimate will be.

We now revisit the method after realizing that the whole image is affected in the same way by resolution issues – the intensity estimate derived from the DS and BS edges will both depend on image resolution in the same way. The DS estimate is proportional to earthshine intensity, while the BS estimate is proportional to ‘moonshine’ intensity (plus earthshine – a vanishing contribution). The ratio of the two estimates will be independent of resolution – i.e. the ratio has the ‘common mode rejecting’ property.

We convolved ideal images of the Moon with the alfa=1.8 PSF and estimated both the ‘step size’ at the edges (on DS as well as BS) and the Laplacian signature. We plot them below: 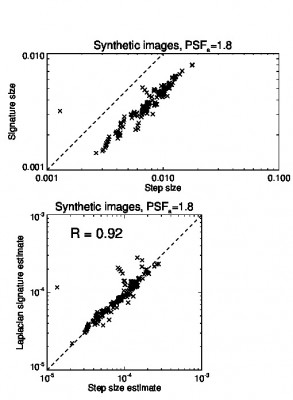 [Added later:] Since we are working with synthetic models we know the actual earthshine intensity in each image, so we can compare what the actual intensity is to what is found with the ‘step’ and the ‘Laplacian signature’ methods: 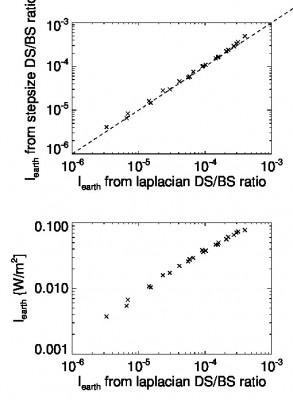 In the first panel we see what we saw above – that the step and Laplacian methods are rather consistent. In the panel below we compare to the actual earthshine intensity.

Since the Laplacian signature method (and the step size method) literally express the DS/BS intensities ratio (which is only proportional to the earthshine intensity) we have different values along the x- and y-axes. The geometric factors having to do with distances and Earth’s radius are not compensated for.

The main result is that the relationship between actual earthshine intensity and the Laplacian signature method (and by extension, the step size method) are not quite proportional – there is a slight curve. In interpreting the above we should keep in mind that the Laplacian estimate of DS illumination from the edge derivatives is in a different role than the estimate of BS illumination – the former is not very geometry dependent while the latter is: That is, earthshine is due to light from a source we are sitting on doing our observations from, while the BS illumination is more angle-dependent in that the reflectance properties of thr Moon come into play to a larger degree – at the moment I am not sure whether there is an angle-dependence ‘along the BS edge of the disc’ that can cause a problem in interpretation. Will need to look at this.

Another thought: is it possible to make a calibration relation between actual earthshine intensity and the Laplacian DS/BS signature estimate?

4 Replies to “Laplacian revisited: A Brain-Wave”