A whiff of success

We do have many problems to contend with – but now and then we are confirmed in what we set out to do: Here is an example of the scattered-light reduction of an observed image (2456034.114etc) where the EFM Method seems to be doing well compared to BBSO linear. We compare to a synthetic model image generated for the moment of observation (i.e. the libration and geometric factors are representative of the observing situation): 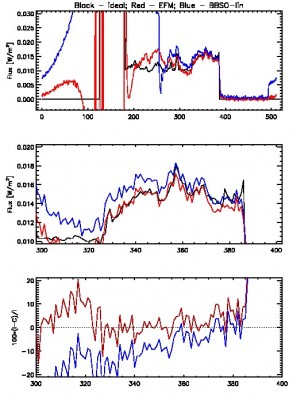 Top panel: slice across the Moon at row 296 so that Grimaldi near the edge is transected. The black curve is the synthetic model unconvolved – it is in units of W/m². The red curve is the scaled and offset profile along the same row of the EFM-cleaned image; and the blue curve is the BBSO-linear cleaned image identically scaled and offset.
Middle panel: detail of the above.
Bottom panel: difference between EFM and ideal and BBSO-linear and ideal, along row 296, expressed in percent of the ideal value.

The observed data were scaled since the units are different; they were offset because the EFM model did not have 0 value on the DS sky. The BBSO-linear, being ‘anchored in the DS sky’ did have a 0 value in the sky. The same scaling factor and offset was used on EFM and BBSO, for comparison, however – hence the little offset on the DS sky at right.

What do we see? Well, the EFM-cleaned (red) line follows the synthetic model quite nicely between column numbers 325 and 370 while the blue line (BBSO-cleaned) diverges all the time. Near the DS edge (columns 370-385) the synthetic model is higher than EFM.

What does it mean? The BBSO-linear method has better removed the flux on the sky – it is designed to do that, while the EFM is designed to minimize the residuals squared in a mask on the sky around the Moon. This implies that the BBSO-linear method, in the present case, would be better than EFM on the lunar disc near the DS sky. As we move further onto the DS disc the BBSO-linear method will fail more and more since the halo is not linear with distance from the edge – the method underestimates the amount of scattered light on the disc between the edge and the BS. We do see how the blue line diverges more and more; we do see the red line cling closer to the ‘true value’ (assuming the synthetic model is ‘true’) across the disc, before it too fails nearer the halo and the BS. The behavior nearer the edge may be a consequence of how we model the synthetic images – we have to use a reflectance model to make the synthetic images – and the angles of emergence and incidence corresponding to ‘near the edge’ is not one for which the reflectance model is inherently very good. The models we use are based on the simple ‘Hapke 63’ model. We speculate that the disparity between observations and synthetic models in the columns 370-385 is due to model inadequacy.

Anyone using a reflectance model as simple as the Hapke 63 model will encounter the above problem if they try to use pixels near the lunar disc edge – the natural thing to do, if the halo is removed using the linear method is to use edge or near-edge pixels.

Hence the problem of reflectance modeling and the inadequate linear method become coupled! Our EFM method seems to be a way around this obstacle – allowing use of disc areas further from the edge where simple reflectance modelling is adequate – hence we should be getting more reliable terrestrial albedo data. One day.

One Reply to “A whiff of success”