For a full month of single images (alfa=1.6) we show how well the FFM does at recovering the terrestrial albedo from the noisy synthetic images. 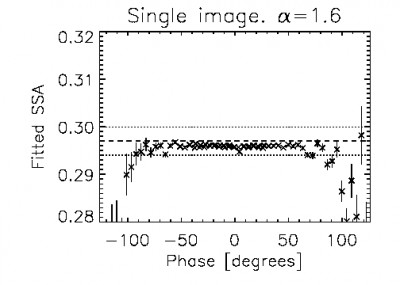 The crosses show the solutions for the single scattering albedo used in the Earth-component of the model that generates the synthetic lunar images. The dashed line shows the true value (0.297). Bars on the points show the LM-estimated 1 SD. The two dotted lines show the 1% upper and lower levels from the true value. New Moon is at phase 0. The simulations were performed on single realistic image calculated using alfa=1.6.

The solutions are clearly biased from to the true value and the bias is significant at the several sigma level, but the bias is small compared to other methods’, such as our own implementation of the BBSO method. Solutions are inside the +/-1 % limits for phases roughly between -90 and +90 degrees fromNew Moon. BBSO quotes 1% levels of uncertainty on albedo for a single night. We get 1/3 % in single images.

If the realistic limits on lunar observability is +/- 40 degrees from New Moon we have significantly extended the range available with the FFM method, compared to the logBBSO method applied to stacks of 500 images which was seen to be more than 1% biased outside about +/- 45 degrees!

Here is a 3-panel figure showing additonally the detected values for offset and alfa: 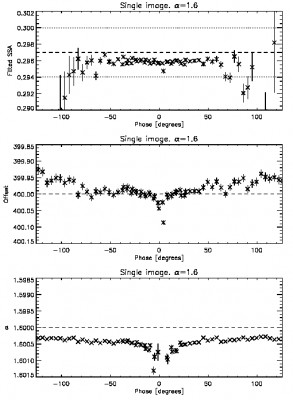 We see some breakdown of the method near New Moon – but NM cannot be observed anyway so that is OK.
I think that the bias in alfa is causing the bias in albedo – so if we could fix that … 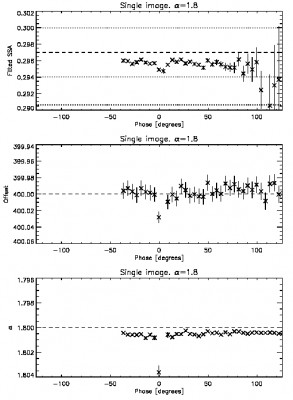