Showcase images and animations Posted by Peter ThejllPosted on Oct 10, 2015 10:21

The recent total lunar eclipse gave an opportunity to apply photometric methods. It is possible that the light from the Sun, passing through the Earth’s atmosphere is coloured by processes that ultimately also have a climate effect on Earth. Recent volcanic eruptions may cause the eclipse to appear more red than usual.

Can this be measured accurately?

The Internet was overflowing with images and image sequences of the eclipse. Among them this composite image by K. Lewis (www.photosbykev.com): 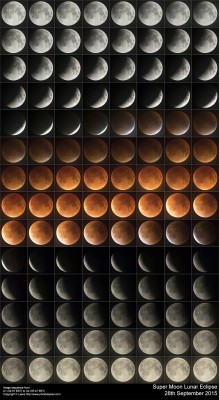 Using the method described in the paper by Park et al, we can convert the RGB values from the image file above to Johnson B and V colours (the possibilities are limited to these two bands – more can be done with the NIR filter taken out of the camera).

We extracted the mean and median B-V colour from the sub-frames above, and plot these values in a sequence, starting from upper left and ending in lower right frame: 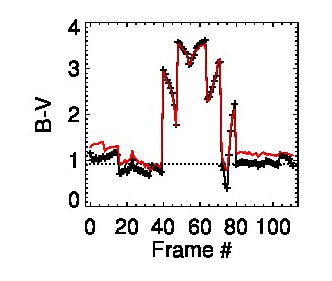 We see the reddening of the Moon as it is eclipsed. The dotted horizontal line is a nominal value for B-V=0.92 based on literature values for the Full Moon, and the measured values from the composite photo were adjusted up by about 0.6 in B-V to roughly coincide with the 0.92 level. We see that the eclipse was redder than the Full Moon by about 2.5 in B-V.

The jagged outline of the curve, and the evident jumps in brightness in the main photo, seem to indicate that the detector used was not linear – this could be because the images were obtained not only on the linear part of the CMOS devices’ transfer curve.

What are published B-V values from eclipses, studied with professional equipment and attention paid to conservation of linearity? Figure 4 of the paper “Wideband Photoelectric Photometry Of The Jan. 20/21, 2000 Lunar Eclipse”, by Schmude, et al, 1999, in International Amateur-Professional Photoelectric Photometry Communications, Vol. 76, p.75+
(http://adsabs.harvard.edu/abs/1999IAPPP..76…75S) shows a change in B-V of about 2.5 magnitudes during an eclipse – like above.

We obtained other images of the 2015 eclipse and also converted the RGB values to B-V, but found eclipse B-V very different from the above. Attention to obtaining Full Moon images just before and after the eclipse takes place is required, as is some attention for exposure levels, trying always to capture the various stages of the eclipse at mid-sensitivity range of the device used.

Also important is that there are gradients in the shadow of the Earth on the Moon and the geometry of the eclipse and the times of observation – and the location on the lunar surface used – all influence the results obtained.