In 1941 Minnaert published a paper about lunar photometry – in particular the reflectance. There is an idea in that work which we can use to view our data, and perhaps learn something.

The intensity we observe in any pixel of the lunar disk is:

Where ‘albedo’ is a measure of the darkness of the material in the pixel and ‘i,e,alfa’ are angle of incidence, angle of emission and lunar phase, respectively.

Consider now two points A and B on the lunar disk placed such that iA=iB and eA=eB. Furthermore we have that the phase, alfa, is almost constant all over the image (alfa is the angle between a point on the Moon and the observer and the Sun – and apart from the finite size of the Moon compared to the distances to Sun and Earth this angle is the same for all points on the image of the Moon). In these two special points we thus have

reflectance(iA,eA,alfa) = reflectance (iB,eB,alfa) so that the ratio of observed intensities from A and B are simply:

By finding many pairs like A and B we could investigate how ratios of albedos across the Moon vary – or compare the ratio from observations to our map of albedo – at the present “Clementine scaled to Wildey”.

We now do just this!

From the synthetic image software code that Hans wrote we have, for every pixel on the model image, its angle of incidence and emission. We can therefore select an arbitrary point A on the BS and find its symmetric point ‘B’ also on the BS, extract the observed intensity ratio A/B as well as the same ratio for the ideal model image and tabulate these against solar zenith angle (i=SZA) and earth zenith angle (e=EZA). We have done this for 1000 randomly distributed points and show the results here: 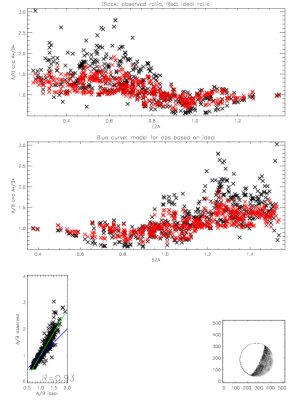 We emmidiately notice the tendency for observed ratios to be larger than ideal ratios – at least for the median to large values of the ratio: the observed ratios lie above the diagonal line in bottom left panel.

The observed ratio has a larger span not just because of ‘noise’ – careful inspection of ‘slices’ across e.g. dark Mare [not shown here] reveals that observed A/B ratios reach more widely separated extremes there than does the ideal ratio slice across the same slice.

This seems to imply that the albedo map we use is too ‘flat’ – it should be scaled so as to give more extreme darks and lights by perhaps 25%, judging from the plots.

We also have to wonder why albedo ratio is a function of EZA and SZA – nearer the terminator or middle of the disc ratios are simply higher than near the limb. As intensities are smaller there while brighter near the limb we wonder what is going on – remember that the ratio is reflectance-independent by construction! Note also that both observations and models behave in this way. It cannot be ‘nonlinearities in the camera’ since the model behaves in the same way, nor ‘scattered light in the observations’ since the scattering-free model behaves in the same way. The model is also assuming a spherical surface – no hills, boulders or crevices for shadows to hide in.

Here is a repeat of the above for a different lunar phase: 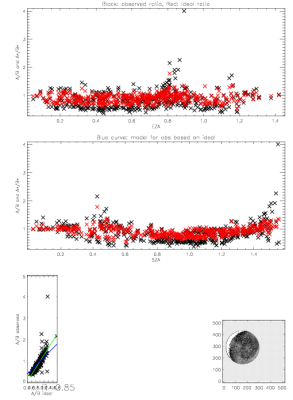 Similar features are seen here – towards small SZAs the ratios go to 1. As before the general picture is that variations observed from dark to light are larger than in the model. This reminds us that we are using a fixed albedo map in the synthetic model – we can expect different dark/light ratios in different wavelength bands. The above scalingmay sereve to achieve this?

We shoudl repeat for many examples from each band and each lunar phase to see which features are general.

There is a comment by Minnaert in, “Planets and Satellites” ed. Kuiper and MIddlerhurst, Vol III. p. 222 to the effect that the “bright limb shows the same brightness over 3/4 of its length and that this was noted by Schoenberg (1925) and this was only rarely checked” – wonder if that last remark is still true? We can certainly confirm that the albedo-ratios tend towards 1 near the limb, but we do not understand yet if these two observations are linked. Time to read Schoenberg!