For the night of 2455864 we have tested the effect of using a 5×5 patch on the sky vs an 11×11 patch. This is the patch in which the average is taken and through which average the model curve is forced to pass. We had noted that a 5×5 patch was small compared to some of the wiggles in the sky background so we tested the use of 11×11 patches.

We also test the effect of using 64-bit rather than 32-bit code – we do this with ‘no change of compilers or compiler flags’.

Finally we tested the effect of taking smaller steps in alfa. The figure summarizes these three experiments: 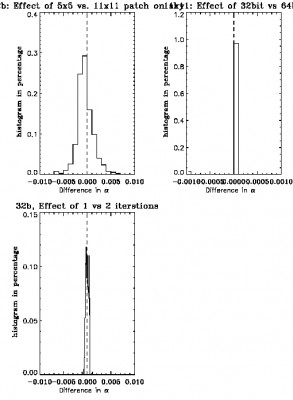 The difference in detected alfa was small when we went from 5×5 to 11×11 patches. The average change was near 0, the standard deviation apeared to be about 1 alfa step (i.e. 0.001), the max and min of the change were -0.6 and 0.4 but only 2% of the 384 images suffered a change in alfa larger than 0.01 in absolute value (i.e. outside the plotting range). We conclude that there is a tiny indication of a low-bias in determined alfa when using 5×5 patches, so we will use 11×11 from, now on.

The effect of smaller steps was negligible.

We next looked at changes in the determined DS intensity.

For each filter and for each of the three modes of the EFM code run on the CRAY we extracted the median DS intensity in a box 11×11 pixels large positioned 2/3 of the radius on the dark side. We also extracted the BS from an 11×11 box positioned at the center of gravity of the image in the observed image.

Run2 was the test for effect of changing from 32 to 64 bit code.

Run3 was the test of the effect of using smaller step sizes in alfa.

For all filters there is a 6 to 7% effect on the BS/DS ratio of going from a 5×5 to 11×11 patch on the sky when fitting the model to the observed image.

The effect of smaller step sizes when searching for the optimal alfa was a little larger – in the range from 0.19 – 0.9 %; largest in the VE2 filter.

We conclude that careful choice of the way in which the model is fitted to the sky and the BS is warranted.