The Laplacian method has been discussed here

We now extend the method to include an identical analysis step applied to synthetic images generated for the moment of observations. We then take the ratio of the results from observations and the results from the models. This will eliminate the effects due to geometry and reflectance (as long as the reflectance model used for the synthetic images is correct), leaving only the effects of changes in earthshine intensity. So, this is another ‘ratio of ratios’ result. The ratios involved are, in summary:

We use only the ‘good images’ identified by Chris in this entry: http://iloapp.thejll.com/blog/earthshine?Home&post=277 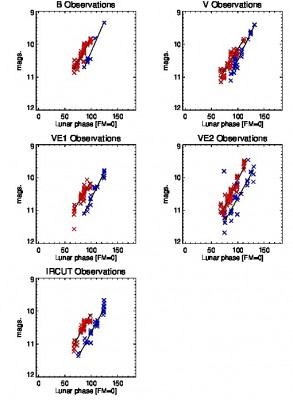 We see the morning and evening branches folded to the same side, for comparison. We see an offset between the branches in each filter, and we see the dependency on lunar phase. We next look at the same ratio but from models. Since we do not have colour-information in our models we redundantly now show plots for each filter as if the models were color-dependent – they are not: but the points available in each filter are different, of course. Recall that a model is generated for each observation: 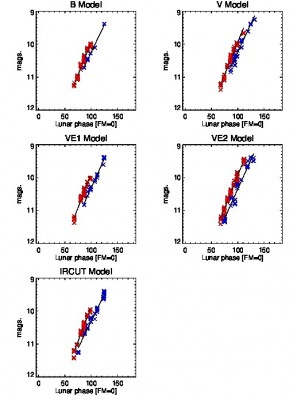 We see a very similar pattern – dependency on phase (but steeper this time). We also notice that the branches are closer together than in the observations.

What does this mean? The branches are separated, in observations, due to different distributions of light and dark areas on the eastern and western halves of the lunar disc facing Earth. Our Laplacian method samples pixels right at the edge of the lunar disc and has evidently met areas of different albedo. The separation in observations is not reproduced in the models – this can imply that the model albedos are incorrectly distributed (i.e. mares and craters etc in the wrong places) this is somewhat unlikely as we use one of the most detailed lunar albedo maps, from the Clementine mission. However, our model does not sample colour – the map used, and thus the ratio between ‘light’ and ‘dark’ – is taken from the 750nm Clementine image [I think; must check!]. This map was stretched to match the older Wildey albedo map [see here: http://iloapp.thejll.com/blog/earthshine?Home&post=253 ] which was made in such a way that the ‘filter’ the WIldey map corresponds to is a combination [see: http://iloapp.thejll.com/blog/earthshine?Home&post=286 ] of the Johnson B and V filters. We see the most well-reproduced branch spacing in the V band observations, compared to the models. This implies we have some colour-information about the two halves of the Moon – or a tool for how to scale the lunar albedo map when different colours are to be considered. 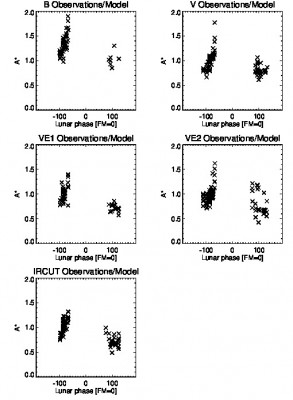 For each filter is shown the Albedo derived – it is the ‘ratio of ratios’ spoken of above and is identical to the one used in BBSO literature – it is the albedo relative to a Lambertian Earth-sized sphere. The model albedo used was 0.31 so the ‘actual’ albedo derived is the above times 0.31.

We see that there is a phase-dependence in this – particularly in one branch, with the observations being relatively brighter than the models at phases nearer Full Moon, compared to phases nearer new Moon.

Since we have seen the EFM method produce less phase-dependent albedos [see here: http://iloapp.thejll.com/blog/earthshine?Home&post=252 ] we think the Laplacian method needs further development and investigation before it can be used.

It is worth listing why the Laplacian method might be useful:

1) It does not require careful alignment of model and observation. The signal is extracted from a robustly defined location in each image.
2) It is a ‘common-mode-rejecting’ method and is not dependent on image resolution.
3) It is relatively fast.