In this entry: http://iloapp.thejll.com/blog/earthshine?Home&post=372 we looked at the evolution of earthshine phase angle as a function of time of day. This is an important subject for us because the lunar surface reflectance function has an ‘opposition peak’ which results in the infamous Opposition Surge near Full Moon.

Our observations have sampled the peak from just under 1 degree to about 1.5 degrees. From the plot in the above post it is clear that at JD start (noon in Greenwich, midnight at MLO) we sample the peak in the direction towards the peak (large to small phase angles). At the end of the JD we are sampling away from the peak (small to large angles).

The two situations are represented by Westerly and Easterly observing directions – Moon setting and rising, respectively.

There is a consequence of this ‘daily sweep’ of the range near the OS: as our reflectance model – Hapke 63 – does NOT contain the right OS we will see a rise or fall in the fitted albedo.

On the basis of the above argument I am making a PREDICTION: when we look at the fitted albedos we should see them INCREASE at the start of the day (because phase angles are dropping and to compensate the lacking reflectance the albedo has to go UP), and at the end of the day the fitted albedo will DROP.

Next, is a plot of the V-band albedos and the time of day: 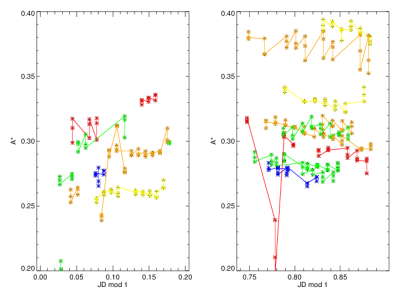 We see albedos plotted against (JD mod 1). For each day one colour has been chosen, but some colours had to be reused. Each day has sequences of 3 points – this is because three fits of the model image to the observed image is performed.

To the left we see no slope, or perhaps a little rise towards the end now and then. To the right we see a general slope downwards. As predicted.

If the reflectance was correctly representing the Opposition Surge there should be no change in albedo as the day passed. We may be able to model the OS so that we can get the slopes to go away thereby determining the OS observationally. Troublesome will be the absence of a clear slope to the left, though. Hmm.

The large difference in albedo from day to day is mainly due to a phase-dependency in the determined albedos. The variations in terrestrial albedo are more subtle. We need to first understand why the fitted albedos depend relatively strongly on lunar phase. It could be due to problems related to model-fitting (although I doubt it since we essentially fit the step-size at the edge of the DS disk and this cannot be corrupted by scattered light). It could also be due to an incorrect reflectance function representation in the model used. This would not be the same dependence as discussed above related to near-opposition angles. The phase dependence I speak of is shown in the second row of panels below (the first being a repeat of the above plot): 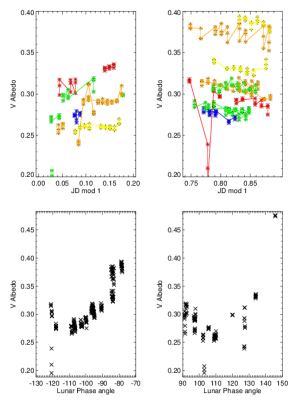 Above (second row of panels) each ‘strip’ is a nights observations. V-band albedos only shown. In this representation New Moon is towards the sides and Full Moon is at 0 degrees.