On the night JD245524 conditions were good: Moon was setting in clear dry skies and CoAdd mode was possible. We obtained images in all bands, and present the reduction to DS/BS ratios using the EFM method here.

Scaled superbias was subtracted from all images. No flat-fields were applied. Images that were poorly centred in the frame were removed. Images for which the estimated PSF exponent was above 2 and all negative values of DS intensity were removed. On the remaining 171 images DS/BS ratios were extracted using two patches on the DS disc – near the rim and further from the rim: (2/3 and 4/5 times radius away from the centre of the disc).

We plot the PSF exponent determined and the B,V,VE1,VE2 and IRCUT bands and DS/BS ratios below: 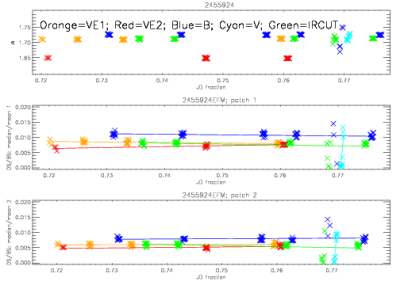 We see that the exponents of the PSF (upper frame) are quite stable for each filter, but that the VE2 filter has a smaller best value (i.e. PSF is ‘thicker’ in VE2).

For the two patches on the DS disc (close to rim middle panel; further from rim bottom panel) we see quite stable DS/BS ratio values but that the value does depend on where the DS patch is located. The V filter is represented only by data near fractional JD = 0.77. We see a large scatter there: this was when the Moon passed directly behind the MLO antenna, which interfered with the images and extraction of the photometry. The considerable scatter near 0.77 should therefore be discregarded – the data should be ignored at that point. This also removes all V data from futher consideration.

Now, these SNRs need to be MUCH bigger to reach our Science Goals of SNR=1000. If the errors are randomly distributed and independent we need 60 times more data-points in the best case (B).

We need to discuss why we have so few data :

a) There are only about 150 good data points (i.e. images). We actually had 210 observations. This number was reduced by the need for images witha well-centred lunar image: This requirement comes from needing similar images to give the EFM method a level basis of data to work on – if the Moon is sometimes in one side and sometims in the other side of the image frame the weight given to thedata during the location of the best fitting PSF varies and leads to systematic effects – i.e. bias. So by centering the Moon better we can have more data to work with.

b) By far the largest factor limiting the number of images is, at present, the faulty shutter: We may have taken more than 1000 images on that night, but most of them failed because the shutter stayed shut. This is despite some improvement received when the Mylar blanket was installed.

c) The amount of data is also dependent on the time interval available: it necessarily starts at sundown for these types of CoAdd images and stretches until the Moon sets – perhaps 2-3 hours at best. The present interval is only 1.2 hours long. If time was not wasted by fiddling with the dome control time could be saved.

d) As we observe in a cycle with equal numbers of images assigned to each filter we are limited by the length of the longest exposures. Change of this strategy could give us a larger number in some filters. Often it is the B filter that takes the longest to get by a factor of almost 10, compared to the broader and redder filters.

The above are the main reasons for the limited number of images we get on even a good night. In order theya re:

1) Wasted time due to shutter failing.

3) Spending too much time on long exposures in B rather than getting many short ones in VE1 etc.

4) Wasted time due to dome and precise telescope pointing issues.

Of these there may be little to do presently about #1, and nothing to do about #2, but #3 should be considered and experimented with and #4 may be possible to do something about soon. I estimate that if 1 could be adressed we could have 5-10 times more data, while #3 and 4 could give us 50-100% more data if adressed.

Thus it seems we will likely not get the 60 times more data we estimate may be needed to reach SNR of 1000 by averaging short-exposure CoAdd mode images alone. This means we really need the Lund mode operating, and the SKEs. Perhaps that is where the investment of time is most valuable?

Here is the above plot with the ‘antenna interference’ points removed: 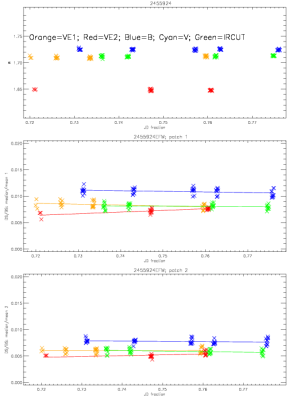 Note how well the VE1 and IRCUT (same filter, almost) line up.