If we assume that the diffuse scattering on clouds preserves the colour of the light (I think this is true – clouds look ‘white’) and if we assume that clouds cover most of Earth (a fair assumption given that the oceans are dark and cover 70% of the Earth) then we can make a model of Earth’s spectrum consisting of a fraction of the solar spectrum plus the complementary fraction of light ‘blued’ by Rayleigh scattering. This model assumes no ‘true absorption’ in the visible bands (also a fair assumption; ozone may actually absorb at UV wavelengths but the solar flux at those wavelengths is small).

By considering the Rayleigh effect and imposing flux conservation we get the following B-V colours for the spectrum of Earth:

Since most photometrically measured extinction coefficients are in the 0.1 – 0.2 mags/airmass range it does not seem unlikely.

In meteorological observations pyranometers are sometimes used to monitor the clarity of the air during the day – they typically measure the global radiation (all wavelengths, all directions – i.e. from the Sun and from the sky) and the ‘diffuse’ radiation – i.e. only the part of the light not coming directly from the Sun. Perhaps it is possible to estimate the fraction of light removed from the incoming beam, by scattering, using such, essentially bolometric measurements?

Using a SURFRAD pyranometer data set from Boulder CO, USA, I determine the noontime ratio of Diffuse to Global radiation, and plot it for each day of a whole year: 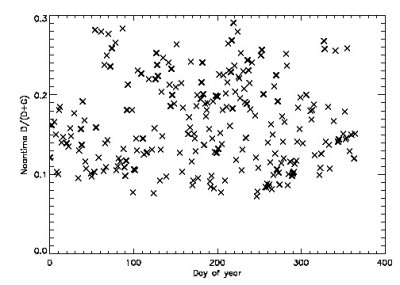 There is a great deal of variability! This is due to clouds. On perfectly clear days I guess that the ratio of diffuse to global radiation is at a minimum since the contribution to the diffuse is only from the blue sky while the decrease of the direct is also only the Rayleigh. Clouds tend to increase the former and decrease the latter giving a larger ratio.

The incoming beam contributes to the diffuse radiation and to the global radiation. The same amount of light scatters down to Earth as scatters into space so:

Looking at the plot it is clear that near the middle of the year you
can see D/(D+G) near 0.1. This is not exactly the same as saying ‘the
bolometric extinction coefficient is 0.1’ but we are close.

Problematic is the large amount of clouds – I shall look for a station that has less clouds!

It seems that Desert Rock Arizona is less cloudy: 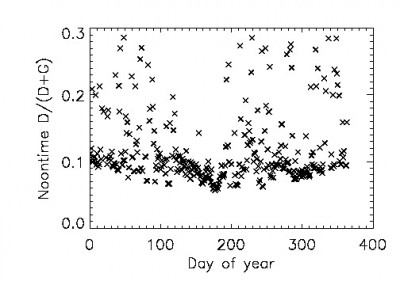 At MLO they publish a transmission coefficient which is approximately the same we are trying to look at – it would seem that at MLO the transmission can be 92-94% when there is no volcanic dust: http://www.esrl.noaa.gov/gmd/grad/mloapt.html

One Reply to “More Moon and Earthshine colours”