Andor camera field experiences Posted by Peter ThejllPosted on May 16, 2012 14:07

Ahmad has tested the linearity of the CCD in Lund, and Henriette presents work on tests based on data taken at MLO. Since even small deviations from linearity in the CCD may be important for us we are revisiting the issue, and present here some results based on the variance-vs-level method which is nicely explained in Ahmad’s report on the Andor Camera. 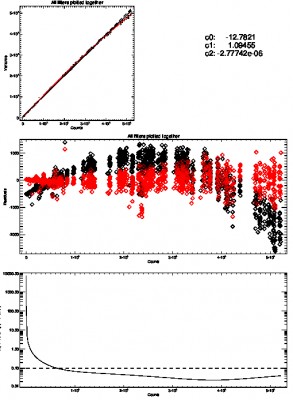 In the upper panel is plotted the variance against the level for all filters. Plots for the individual filters are available but the scatter is not much less. The solid line is the fitted least squares linear regression. As red is plotted the best-fitting parabola, and the dashed line is the diagonal. Beside the panel are written the coefficients of the best fitting 2nd-order function. In the middle panel is the difference between the data and the linear fit (black symbols), and between data and 2nd-order fit (red symbols).Lower panel shows the magnitude of the formally estimated uncertainty of the fitted parabola, in percent of the signal level. Dashed line shows the fiducial 0.1% error level we strive for. Variance and level was calculated from a central area of 190×190 pixels in the pairs of images. Images were bias subtracted using the ‘superbias’ we have, without scaling to surrounding dark field levels.The nonlinearity is clearly quite large since at 25000 counts a 0.1% difference is just 25 counts – small compared to the differences seen above. At 50.000 the observed difference of 1.500 corresponds to 3%. At count levels above 55.000 the relationship rapidly breaks down and saturation occurs. For observations below 55.000 we can probably correct all observed images we already have. In the future it may we best to observe only up to 52.000.Acceptable linearity may only be available up to count levels of 10- or 15.000. We have to correct our observations – but at least it can be done at any time in the future. We should now and then gather and archive a huge set of lamp images as were used above.

One Reply to “CCD linearity”