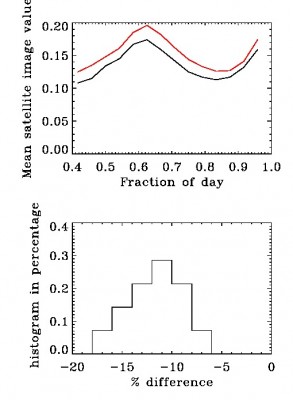 Upper panel: average image pixel value for sequences of MTSAT images, 1 hour apart, for almost one day in March 2013 and a week later (red curve). Image pixel values is in arbitrary units but is proportional to pixel brightness. Lower panel: difference between upper panel black and read curves, expressed as a percentage of the mean of ther ed and black curves.

The difference between the two curves is on the order of 10% and varies from 8% to 18% during one day.

This tells us two things: Albedo (or something proportional to albedo) can vary by roughly 10% over a week. Albedo can vary during one day by almost as much.

This is useful information to have when we interpret the earthshine data.