In this entry on the blog: http://iloapp.thejll.com/blog/earthshine?Home&post=272 we discussed the Laplacian method of estimating earthshine intensity by removing the influence of the scattered light halo. We have tested it on a good image from near New Moon (i.e. lots of bright DS, very little interfering BS). Consider this plot: 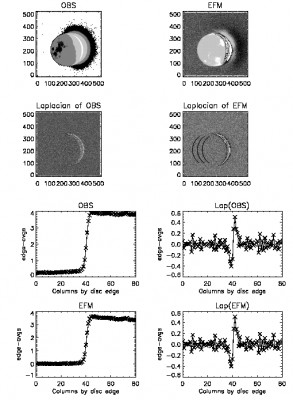 In the top two rows we see the observed image, the EFM-image and the Laplacians of these. In the second row second plot there are three additional curves, in black. The centre one shows the estimate of where the disc edge is, based on the estimates we have of disc centre and disc radius. The other two lines are parallel outliers at + and – 40 pixels from the edge. In the third row we show first the coaddition of all rows along the edge, using the estimates of the edge and the outliers as start and stop – this allows a coaddition that centres on the disc edge. Second in third row is the same thing based on the Laplacian of the observed image. We see the signature of the double derivative of an edge. In the last row we show the same as in the third row but for the EFM-cleaned image and its Laplacian.

The application of the EFM method removes most of the halo and this is consistent with the slight lowering of the slope after the ‘step’ in the first panel of fourth row, compared to first panel of third row. We extract the size of the ‘jump’ as well as the distance between the minimum and the maximum of the Laplacian edge signatures. The jump size is estimated as the difference between the mean of the first third of the curve and the last third. We collect the four estimates of the earthshine intensity – two jump heights and two estimates based on the Laplacian signature, and plot them below for 4 differently rebinned versions of the original images – unbinned; binned 2×2; binned 4×4 and binned 8×8. This is done to ‘sharpen’ the edge in case the edge is ‘fuzzy’ so that the 3-point numerical operator used in constructing the Laplacian will interact correctly with the edge.

The differences are quite large – several percent, and there is a dependence on the rebinning of the image – even in the case of the step method. The results that ‘ought’ to be the best is the jump-size one based on the EFM-cleaned one since the halo is absent and because the jump size method should have less statistical error-of-the-mean than the signature size method since more pixels are involved in estimating the former. The error-in-the-mean for the jump estimates for the unbinned image is of the order of tenths of percent – clearly dominated by systematic effects.

The above suggests that there are large method dependencies.

The ‘jump estimator’ may be victim of the slopes seen near the jump – especially in the EFM case – with such slopes the mean before and after the jump is dependent on just how you estimate the jump. Possible improvements is to extend a linear regression from the first half or third of the points, before the jump to the midpoint and do the same from the other side and calculate the ‘jump size’ as the difference between the two extrapolations. The slope is still a concern, however. It is due to the lunar surface albedo variations. The Jump size itself is a function of earthshine intensity as well as lunar surface albedo and therefore on libration, as well as the geometric distance factors. Being estimated right at the edge the reflectance is a constant, leaving lunar albedo as a variable factor (through libration). This could be taken out with knowledge of the parts of the surface of the Moon right at the edge – i.e. via modelling.

The ‘signature size’ method has different challenges – it is based on fewer pixels for one thing. It also depends on the lunar albedo – and not on reflectance, provided the edge is used (and not features on the DS, as Langford et al do). However, the method depends on knowing that the image is in good focus. Bad focus will blur the edge causing a lowering of the signature size – for area methods such as the EFM we do not depend on a sharp edge but can estimate levels from regions chosen away from the edge. Of course, we still get blurring from lunar features overlapping.

The above study did reveal dependence on binning – but if blurring was being addressed the results are not encouraged as there was no convergence.

So many things to compare! Super student project! A study of artificially blurred synthetic images could be done, and ‘step’ and ‘signature’ methods compared.

One Reply to “More on Laplacian method”