I’ve developed an kind of ’empirical’ method for measuring alpha and ES on a frame, I am working from 30 co-added 30 ms exposures of a fake moon, so the S/N is rather good.

Here’s how it works:

Three boxes are defined on the lunar image as shown below 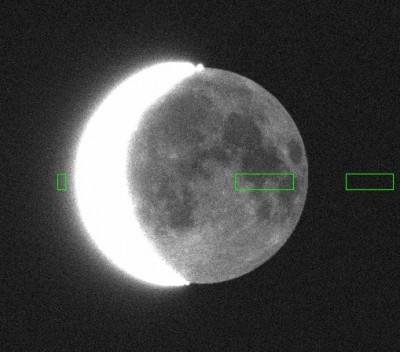 Image shows an example synthetic lunar image (30 co-added 30ms exposures)
for some value of alpha and earth albedo (threshold is identically zero in
the tests done to date).

For each alpha and albedo pair, the total photons are measured in boxes 1 and 2.
I then ’empirically’ calibrate relations between the photon counts in the boxes and alpha and albedo. 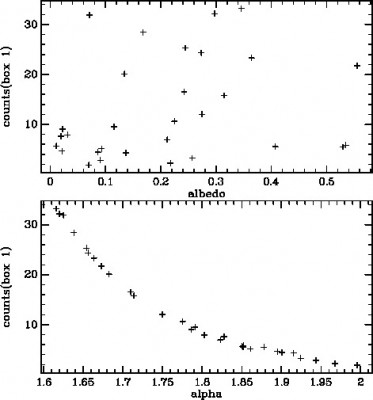 Above is the plot for the counts/pixel in Box 1 — it correlates extremely well with alpha and has no measurable dependence on albedo. The lower plot implies alpha can be measured with an accuracy of ~0.01 from the counts in in box 1. (Note well that alpha here is the power to which the PSF is raised — it is already a power law like r^-1.6, and it is then raised additionally to power alpha). 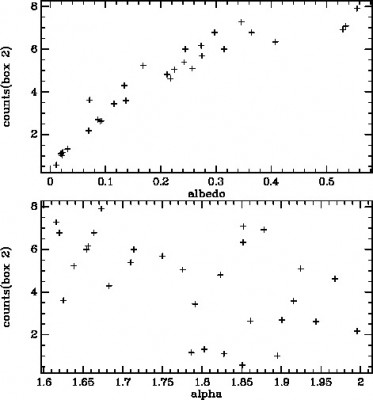 The counts/pixel in box 2, selected to be mainly albedo sensitive, are indeed very well correlated with albedo. There is a very small dependence on alpha (lower panel). Taking into account both dependencies results in recovering the albedo with an accuracy of about 0.03 — compared to a typical albedo of 0.3, for an accuracy of 10%. We require 1% accuracy! Not sure what’s driving the 10% figure at this stage. Is it merely Poisson?

We can improve things by using more of the frame — the boxes were selected pretty arbitrarily just to get the ball rolling. The modeling is also pretty ideal at this stage as the error in the threshold is not yet included, and one has to have a good synthetic moon image to get started — any error in the synthetic moon (i.e. before scattered light and Poisson sampling is included) will bias the method.

One Reply to “New analysis method”