CCD alive after all?

The image below is taken at the IIWI computer with the CCD camera
attached to the board, sitting in a PCI slot on the IIWI. The software
used is SOLIS. 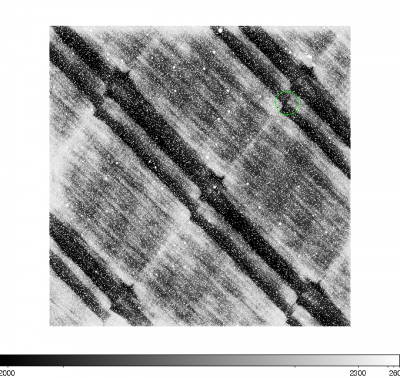 This image looks like things we have seen before. The broad stripes are reversed but that may be something in the display software settings. It is a very primitive setup – all I have managed to do is take a
picture at some long exposure time. The CCD is still attached to the
telescope, I think, so the shutters are closed and what we see is a flat+bias
frame. As it was dark in the dome when the image was taken the ‘signal’ is dark current – not light. The bands are structures in the flat
field. The spots are noise. The large spots are possibly CR hits?

I think the image proves that the camera is able to take pictures. The
noise may be due to a damaged cooler or – more probably – that the
cooler is not switched on (I don’t know how to do that) yet.

It is at least an image from the camera – so board and camera must be
OKish. Why then are there no images when the camera is attached to the PXI? One
answer could be that the PXI was damaged during the MLO power surge. I
am leaning towards that theory now.

Added later: Here is an image with cooler ON. 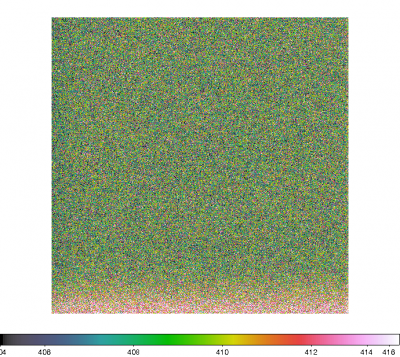 The minimum values is 402 – a bit high, but at least it now looks like a bias frame. I would say that there is nothing wrong with the camera or its board. So the problem must be in the PXI!

One Reply to “CCD alive after all?”