My last post was on techniques to measure the ES using artificial images as input.
Three boxes are defined on the image which are mainly sensitive to alpha, ES and threshold. Box 1 (off the BS limb) turned out to be completely dependent on alpha alone — and one can get a very accurate alpha measurement from just measuring the photons in the box (see plot below). The scatter in alpha is only 0.01 in tests of the method based on semi-realistic synthetic images made by coadding 10 x 30ms images together and properly including Poisson noise. Error in the bias level or registration of the moon and overall normalisation of the image is NOT yet included. Having determined alpha, it takes a little care to then compute the amount of light due to BS scatter in the box on the ES limb, and subtract it. Doing this, one then gets the actual ES level in the box. This correlates very well with input albedo and can be empirically turned into an output albedo (see plot below), with a scatter of 1% — our target accuracy. So it looks to me as if 1% is achievable! Yay! However, there are quite a few systematic effects not yet included here, all of which will shift us hither and thither. So that’s yet to be done! 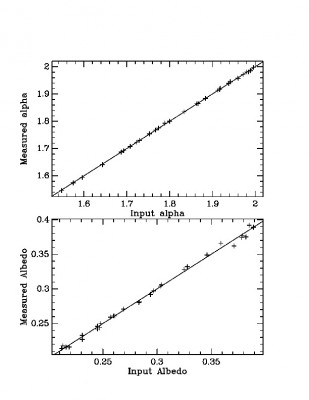 Basically I think this method is the same as Peter and Jacob are pursuing at the moment — simply trying to fit away the unwanted scattered light in the ES box — except that I do it “empirically” by building a calibration from a range of synthetic data with different alphas and albedos — whereas they are working from a single frame — which is what we will actually have to do in practice.

Anyway, all of the above gives considerable oomph to the idea that the glass is 90 percent full!