As a follow up to the knife edge imaging of the moon with the Canon 35
mm camera, I took images of a laserpointer shining into the lens.
Laserpointer was set on with tape and shone into the camera lens from a
distance of about 5 meters. Camera was on a good tripod. The laser
pointer was aligned to be pointing into the lens by watching to see it
emerge from the back of the camera out the viewfinder and onto a wall
behind the camera. Eyes were kept well away from everything!
Exposure times of a few hundredths to a few thousandths of a second gave good halos. 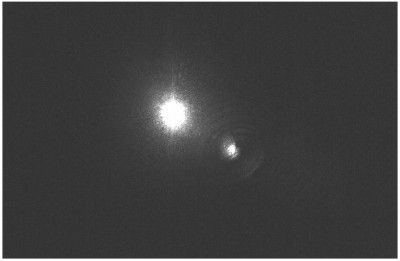 Laser was pretty well centered. There is a weak secondary image off to lower right. The main image is saturated in the core out to about 10 pixels radius.

The laser has a strong core surrounded by a quite uniform intensity “platform”, after which the light falls away like a power law.

The radial profile of the laser (blue) compared to the moon (green) is shown below. 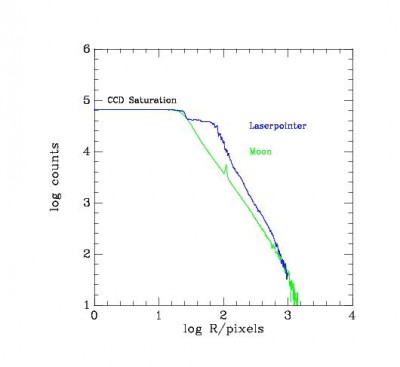 The laser pointer’s profile falls off faster than the moon — but not very much faster.

If we assume that the laser is a good point source, then there is scattering in the lens/CCD combination in the camera which is seen as a power law at large R.

The lunar profile is then interpreted as a combination of both scattering in the camera and scattering in the atmosphere. Its slope is shallower — so atmospheric scattering totally dominates at large R (scale both powerlaw falloffs to the same flux at log(R)=2 or 100 pixels to see this — atmospheric scatter would then dominate internal lens scatter by about an order of magnitude out at R=1000). Not sure what’s happening close in, as the laser pointer has a strong uniform intensity “platform” of light around the core — easily seen by eye just by pointing it at a piece of paper. A point like source of light, like a street lamp seen at a large distance might be a way around this problem.

I also imaged the laser pointer projected onto a white wall — long exposure times of many seconds — and got the same result — similar core and platform and a halo with the same slope.