We had a method to measure exposure times – but the method depended on an LED inside the telescope system, and it appears that the system scattered light which interfered with exposures. So we had it turned off. From data collected before the device was turned off it is possible to look at the relationship between requested and supposedly actual exposure times. 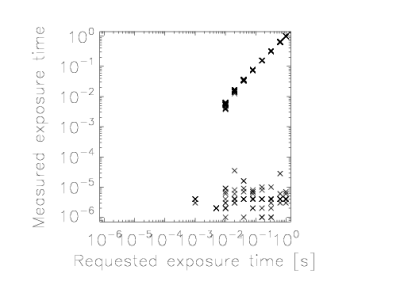 and use this relationship to correct all exposure times. We have tried this.

On the left, results without correction of exposure time. To the right with.

We have extracted B and V magnitudes from the set of ‘good images’. We have converted to magnitudes using Chris’ NGC6633 and M22 calibrations. For B and V images taken within ½ and hour of each other we have calculated the mean B and V values for the BS and then B-V. We plot these values against lunar phase as well as the time of day, and we see that there is a phase- and time-of-day-dependence in B-V. When we compare B-V from images where the exposure times have NOT been bias-corrected with B-V from images where the bias HAS been corrected we realize that the problems are much worse for the bias corrected images, suggesting that the bias-correction is not valid.

That in turns suggests that the method for measuring exposure time is faulty. As far as we know the method was based on passing IR-light through the shutter aperture to a detector and then calculating the opening time of the exposure from data collected. We are not sure if this was based on a timing mechanism or a flux-collected method.

From our own images of a constant light source we ought to test the stability of the shutter. From the lab we have Ahmad’s laser images, and from MLO we have many stellar images, Jupiter images and also hohlraum images.