According to theory, the aberration for a lens in a circular aperture, like ours, is given by the Airy function which is proportional to (BESELJ(r,1)/r)^2.

For a single wavelength the function looks like this: 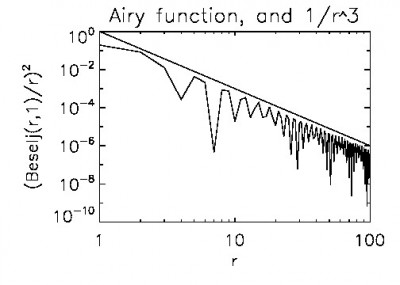 Theory also predicts that assymptotically the envelope of the Airy function should go as 1/r^3, which is also plotted on the graph above.

For mixed-wavelengths as in our case the curve becomes smooth(er) and we should expect to see our PSF as a 1/r^3 envelope. Steeper envelopes than this should not be observed in correctly analysed optical systems. This has bearing on the 1/r^2 ‘King profile’.