What is the effect on observational coverage if we have different numbers of observatories and observe in different ways?

For 1,2,3 … observatories chosen from the list of known observatories (in the IDL code observatory.pro) and evaluating at 15 minute intervals we get the following (non-optimal, but pretty good) results when January and July are combined: 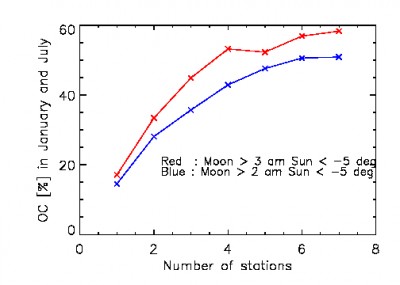 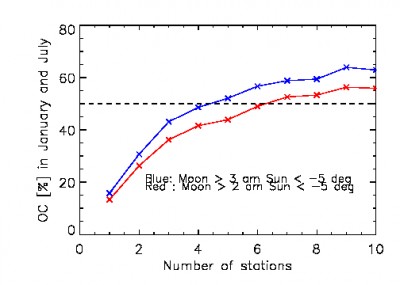 Upper panel: The red curve shows OC for Moon above 2 airmasses and Sun lower than 5 degrees under horizon. Blue is same but for 2 airmasses. The dip at 5 in the red curve is an artifact of the search method we use – exhaustive search between 44 available observatories would be too expensive so we seach for best of 100 random picks of 1,2,3,4 … in the list of 44. Lower panel: The same, but evaluated for more stations, best of 200, and with a 10% random – uncorrelated – occurence rate of ‘bad nights’ (clouds, for instance).

We see that, compared to this we have less OC – that’s because that search was for ‘Moon above horizon, Sun below’ instead of the more realistic constraints used here.

We see that extending observations from AM 2 to AM 3 is equivalent to adding two observatories for midrange values.

We see that adding many more observatories is in the end a loosing proposition – the 7th observatory on the blue line adds nothing compared to the sixth.

Notes:
a)More exhaustive searches can be made, but takes time. This would probably smooth the curves above and also uncover slightly better solutions.
b) We have restricted the site choices to the positions of known observatories. Since most observatories are on the NH summer months (when the Moon is not as high in the Northern sky) there is a handicap.
c) The method is slow – because the altitude of Sun and Moon are evaluated from very precise routines. Simpler and faster expressions for altitude could be used – but one for each observatory would be needed.

One Reply to “Observatory Choice Returns”