I have made an attempt to figure out what the noise levels are at various fluxes in individual frames.

28 images of the nearly-full moon were used. They were very carefully aligned (using subpixel rebinning and the iraf task imshift). The shifts were determined with a fortran program which centered the moon using center of light — this was written because no iraf task I could find could easily align such images without reference stars.

Below I show in green circles the regions that were used to measure the standard deviation of pixels in a 10×10 box on the lunar face. These were chosen because they are relatively flat and have a range of luminosities. All the pixels in the scattered light off the lunar edge were also used, in a sector starting from the center between the position angles 40 and 50 degrees (i.e. off to the upper right at 45 degrees). 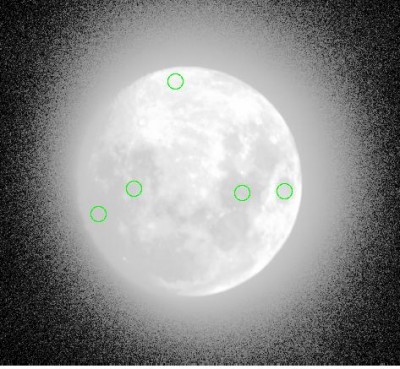 If the noise is Poissonian, then these are related 1:1. The plot below shows that this is only approximately the case (solid line). A closer model is that the noise is about half of what is expected (dotted line). Why the noise is sub-Poissonian is open to speculation, but must be due to some slight smoothing we don’t account for (possibly iraf introduces some smoothing when rebinning the data for the subpixel shifting). 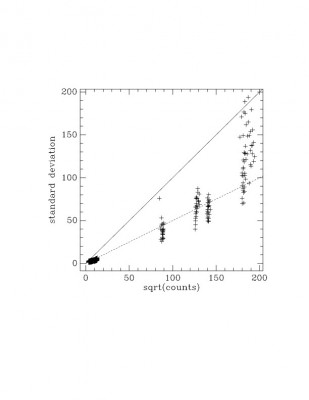 The points at the lower left are those from the scattered light off the lunar edge. The other points are the pixels in the 5 small patches indicated by the green circles in the previous figure.

It’s difficult to fill in more points because it’s hard to find flat regions of the appropriate luminosity. Flat regions are needed because the technique is very sensitive to slight misalignments in the images (if one examines regions where the luminosity is changing rapidly — such as near the lunar edge, craters, strirations etc on the lunar face — the standard deviation goes haywire).

Assuming Poissoninan noise in test data generated from synthetic moons appears to be a conservative option, as it is pretty close to the correct value and possibly an overestimate, so currently I’d recommend that.

Update and error correction: The ADU conversion for this chip is approx. 3.8. The statistics above are were done in ADU, not photons. This of course accounts for the factor of two (=sqrt(3.8)) problem above. Thanks to Peter for spotting this error. 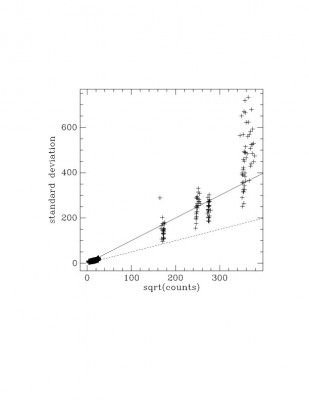 Using photons instead of electrons gives a pretty close fit t the 1:1 relationship. We could try this for a range of lunar exposure times, using the same flat regions on the moon and the halo off the edge, to fill in the gaps for a range of luminosities.

One Reply to “Noise model”