I have measured the pixel noise in the Canon EOS 35 mm camera. This is the same one as used to measure the halo of the moon at large distances (up to 15 degrees) from my Sydney backyard.

60 exposures were taken of a flat white surface, in groups of 10, with 5 exposures times from 1 second down to 1/200th of a second. (A 6th exposure time was discarded due to saturation).

the tiff files this produces still have colour information, which I wasn’t expecting. The fits files are of course grey scale, but I suspect they are averaged over the three colours (RGB), so that the apparent photon counts are three times smaller than the actual photon counts.

The standard deviation and mean flux in 9 randomly chosen individual pixels was computed across the of 10 images obtained for each of 5 exposure times. The square root of the mean (times 3) is then plotted versus the standard deviation of the values, yielding 45 noise measurements (i.e. 9 pixels x 5 exposure levels of the pixel = 45). If the noise is anything like Poisson noise, these should lie on the 1:1 line.

This proves to be approximately the case as seen below. 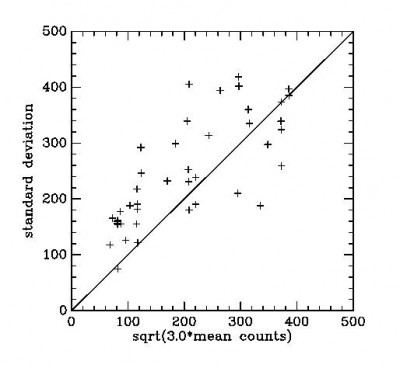 It’s pretty noisy though! (i.e. the noise measurement is noisy).

Inspection of the fits files ds9 shows that there are clear correlations on various scales in both the X and y directions in the images — so the camera is surely introducing smoothing of some sort, so there is only so far one can push this analysis!

Conclusion : Poisson noise is a fair first order approximation for the behaviour of a commercial camera CCD chip.