On the July 26 2011 occasion of observing the star tau Tauri being occulted by the Moon we followed the Moon from just after Moonrise until Sun rose some hours later. During that time we tracked the star at sidereal rate so the Moon drifted through the frame.

Determining the radius and image-plane coordinates of the lunar disc we plot these: 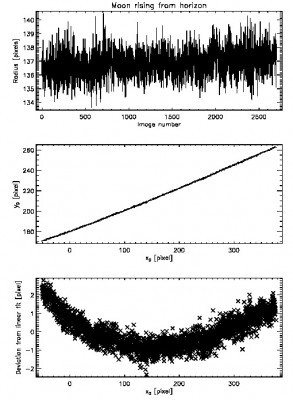 We note that the radius increases slightly as the Moon rises – probably an effect of differential refraction decreasing as airmass approached 1. At most the radius estimate increased by about 1.5 pixels during the sequence. The standard deviation about the line is 1 pixel, telling us what the precision is of the method used to estimate lunar disc properties (it works by fitting a circle to points on the edge of the lunar disc).

We also see that the Moon did not follow a straight line across the image plane. The deviation is up to 5 or 6 pixels – about half an arc minute. This may be a refraction effect or a tracking effect or indeed an orbital effect – the mount we have does not track the Moon in declination.

In summary we see that the effect of differential refraction across the field is not more than half an arc minute at large air masses, consistent with physical estimates.