In a previous post (here) we have compared the Wildey and Clementine albedo maps. These maps are important for our synthetic modelling code since the albedo (along with reflectance assumptions and correct geometries) are the basis of constructing realistic model images, used in analysis. We can compare these two maps very directly by accessing both and plotting the mean albedo in boxes at common lon,lat positions: 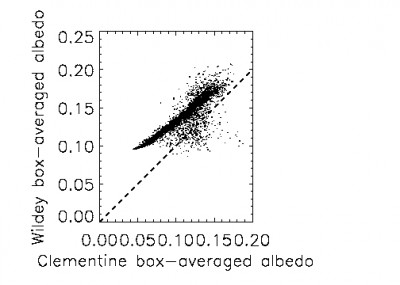 Evidently, the Clementine albedos are lower than the Wildey ones by a factor of two for dark areas and by some tens of percent at brighter areas.

This may be an explanation for the discrepancy we have between observed morning/evening brightness ratios and modelled ones, which Chris Flynn put his finger on.
We seem to have [not shown, but material could be inserted] an observed difference (expressed in magnitudes) of 0.12-0.14 magnitudes at absolute phase 90 degrees between the morning and evening integrated brightness. In models, based on Clementine albedo and either Hapke 63 or Lambert reflectances the difference is more like 0.3 magnitudes. If the Wildey map is more correct than Clementine, in terms of the highlands/mare albedo, then using the ‘flatter’ Wildey albedos in the synthetic code would help on the morning/evening brightness issue by lowering that ratio in the models.

The issue with using Wildey instead of Clementine is that Clementine is a global map – Wildey only covers something like -89 to 89 degrees in longitude and something similar in latitude so there is no remedy for modelling under lunar libration. We could ‘scale’ the Clementine map, using the above relation and see what that gets us, though.

Before we do that, we should fully understand how our own synthetic code uses the Clementine map – I believe there is more to its use than merely being used as a lookup-table. Hans will be able to tell us about this.

A second-order robust polynomial fit to the above data (where points where Clem > Wild have been omitted) is: