PSF in V and B

It is clear from the colour maps we have been making of the moon, that the B band PSF must be quite a bit broader than the one in V-band. We have only measured the V-band profile with any precision to date: this is a first go at the B-band profile.

The images used are these:

A wedge shaped region is defined for each, as shown in this figure by the green vectors: 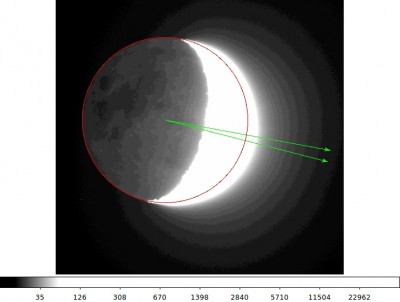 The (V band) image is on a logarithmic scale, with counts/pixel shown along bottom. The red circle marks the fitted (by eye) position of the moon. 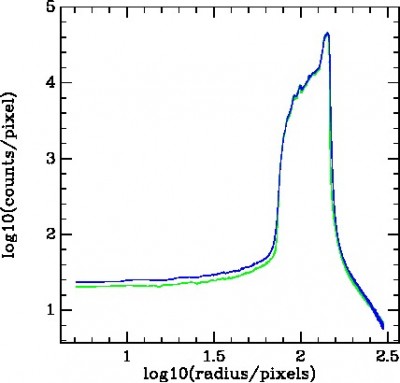 Plot shows log radius (from center of moon, in pixels) versus flux (counts/pixel) in V band (green curve) and B band (blue curve).

It’s clear that the dark side of the moon (DS) is bluer than the bright side (blue curve offset by ~0.05 in the log on the DS).

Plotting distance from the edge of the bright side, we get this: 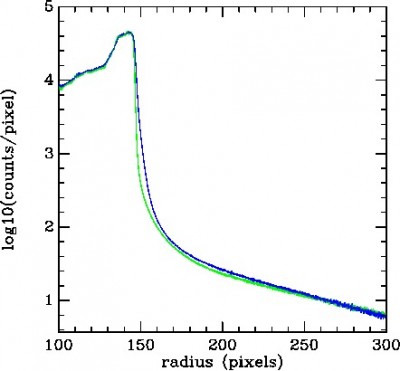 Focusing on the falloff of light off the brightside edge (coincidentally the B and V band fluxes are almost identical in the two images, so they are effectively normalised at the peak flux) — we see in the figure above that the blue light has considerably broader scattered light than the V band. (Note that the radial scale is now linear, not log).

Next plot shows the falloff of light on a log-log scale, as a function of distance from the lunar edge (less 3 pixels, in order to catch maximum flux). 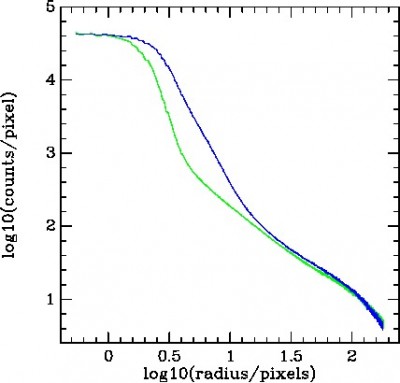 Up to now, we have been using a single V-band scattering profile for the light — which is based on this technique of measuring the scattered light off the lunar edge, fitting a power law to the falloff at large distance (the power law tail of the profile, which has a slope of order -2.7 to -2.9 on very clear nights, at least in the V band).

However, there is a large excess of light from the lunar edge out to about 25 pixels. This is messing up our colour maps, producing the dark (very blue) artifacts around the moon.

More work is certainly needed! A deconvolution method to extract the true PSF from full moon images, in all our bands, might be the thing to try next, rather than the “poor man’s” wedge method! (Note that in the wedge method, we correct for the fact that the moon is not a point source, we do not use the profile of the light in the wedge directly!)