Lots of thin cirrus! 9 degrees C. Taking lunar images. Will follow the Moon up in case it clears before dawn.

Can confirm that GOTOMOON script command works – goes right to the Moon. [Added later:] but, weirdly, seems to drift slightly. Since the table is OK it must be the calibration that goes slightly off – polar axis alignment issue?

DOMEAZ was supposed to put the dome where the telescope is pointing – and it worked for a while, and then started sending the dome off to strange places. Perhaps some homing is needed on the dome before using the command?

to see if it keeps the Moon centered. At least the MOVEMOONTOREF does not send the telescope anywhere crazy. 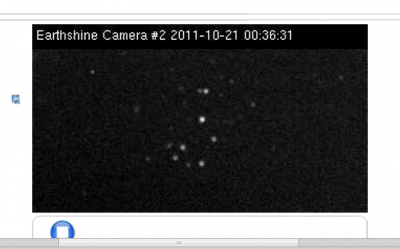 Nice screendump of what the Front Camera Saw earlier today. The Pleiades!