Putting the Force to the Test

Following up on this entry we test the Force method on ideal images. This should enable an understanding of the methods actual strengths and weaknesses.

We take an ideal image and fold it with two PSF’s – one with alfa=1.74 and one with 1.76. The 1.76 image is the ‘sharper’ of the two, so we now subject this image to a test where it is folded with various PSFs so that it becomes ‘less sharp’, subtract it from the 1.74 image and look at the difference, expressing it as a percentage of the known intensities (known from the ideal image it is all based on). 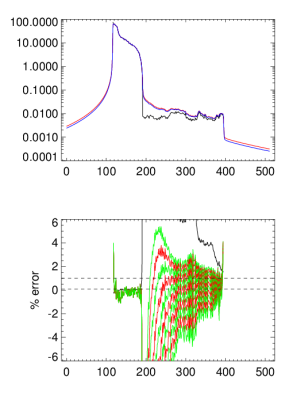 In the upper panel we see the cross-section of the ideal image (black line) and the 1.74 image (red) and the 1.76 image (blue). In the lower panel we see the percentage differences. Black curve is for the difference between the red and blue curves (errors on the DS larger tan 1% everywhere, growing fast as we approach the BS), while the green and red curves show the percentage difference between the 1.74 image and a sequence of images formed by folding the sharper, 1.76, image with PSFs using alfa=1.98, 1.96, … , 1.88. (top green curve has alfa=1.98, next down is red and has alfa=1.96, etc) The difference can, evidently, be less than 1% (for alfa=1.90) but not all over the DS at the same time – there is a tendency for the error to dive faster near the BS and in fact become negative. Near the DS edge to the sky it is possible to have errors in the 0.1-1% interval.

This test is realistic in that the PSF used is developed from real images; in that the procedure of modifying one PSF to another through the use of raising a canonical PSF to a power (alfa) is theoretically underpinned; and in that the brightness levels used in the ideal image are realistic.

The test is unrealistic in assuming that an image with one PSF can be transformed into an image with another PSF by convolution; the procedure of generating PSFs from a canonical PSF through exponentiation is probably only good in the wings of the PSFs.

The test shows that the method is not foolproof. Possibly it is better to first deconvolve an image and then forward convolve it in order to match PSFs – but this procedure needs to be tested on its own.

The test seems to show that for areas near the DS/sky rim a halo can be removed so that errors are in the few tenths of a percent range.