We have been using the Clementine mission lunar albedo map for our work. There is an older digital map, by Wildey (The Moon, vol, 16, 1977), which we obtained access to thanks to Tom Stone of the USGS.

Here is a graphical comparison of the two: 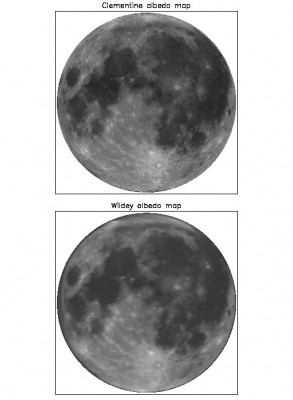 Here they are again, now interpolated to the same 2.5×2.5 degree grid so that they can be compared numerically, along with their relative difference: 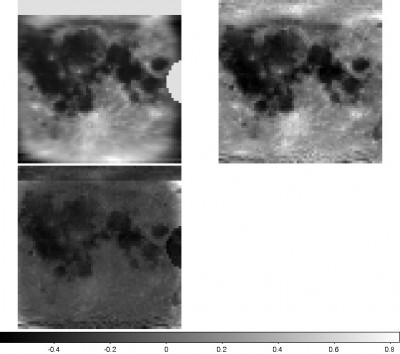 Upper left: Wildey map. Upper right: Clementine map. Lower left: the relative difference = (W-C)/C. There are some interpolation artefacts on the rhs of both maps as well as in some of the edges, brought about when the full-globe result from Clementine (orbiting lunar satellite) and one-side-only result from Wildey (ground-based telescope observations) are accessed.

The map of the relative differences reveals an overall albedo offset with Wildey being darker than Clementine. In the Mare areas differences of 40-50% are found whil ethe brighter highlands have differences in the 5-20% range. The differences in albedo is therefore not a constant but depends on albedo.

We see no obvious longitude or latitude dependence in the difference. This may be relevant to whether we are interpreting the Clementine map correctly in terms of angle-dependence in the conversion from observations to the map. Or the same convention was used in the Wildey map, produced 30 years earlier!