From night JD2455864 V-filter moon images I have selected images with similar count levels in the bright part of the Moon. This resulted in 23 images. These I have aligned and coadded (mean-half-median method) thus obtaining a coadded object image O, and a standard deviation image, delO. From these two images (and images with estimates of B, delB, F, delF) I constructed a S/N image calculated pixel by pixel. I found the DS to have S/N ~2-3 and the BS to have S/N ~30-40. The S/N image looks like this 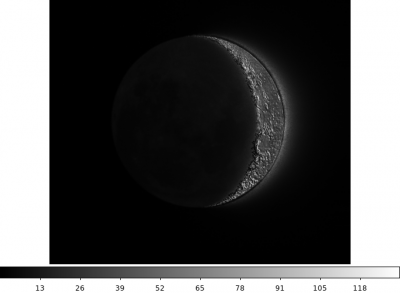 While the DS S/N value might be realistic, the BS S/N value is much lower than expected. This is likely due to the fact that co-add mode necessarily is observed close to a rising or setting moon. On this particular night the Moon was setting, and the 23 selected images are obtained with a 30 minutes interval – in which time the Moon went from an altitude of 22 degrees to 17 degrees. The typical BS count level falls in this period from 27900 to 26400. A decrease of about 5.4%.
Next I tried scaling the images after alignment before coadding. I have scaled them using an 11×11 area in Mare Crisium as reference. This area had a mean in the unscaled coadded image of 10300, and I have scaled so that each image has the value 10500 in that area.
scale_factor = 10500.0/AVG(im[360:371,230:241])
This gave a DS S/N ~1.5 and BS S/N ~100+. The BS S/N seems pretty stable of the exact scaling factor, but the DS S/N increases dramatically (S/N ~12) if I use for instance 15000 instead of 10500. I simply don’t think we can count on the S/N values calculated per pixel basis after scaling.

Conclusions and thoughts: If we scale the moon images to counter the setting/rising moon we seem to be able to achieve a S/N on the bright side similar to the poisson noise. It is much more troublesome to estimate the S/N on the dark side. The S/N on the dark side is very sensitive to the method of scaling and the scaling factor. But perhaps a S/N of 2-3 (as determined without scaling using only images selected to have at least somewhat similar bright side count levels) is a decent estimate.