We have indications that the halo seen in B and V images are somewhat similar, but that VE2 images of the Moon have decidedly different halo profiles. Because the filters used in B, V and VE2 are fabricated (and function) differently we may have the situation that this causes the differences in halo profiles. B and V are ‘coloured glass’ filters while VE2 is a thin-film filter. In a DSLR detector the R,G and B filters are essentially bits of coloured semiconductor material. As a test we inspect the halo seen around the Moon in images taken with a DSLR camera. In such images the R,G and B channels are obtained at the same time at precisely the same observing conditions.

On the internet (http://bit.ly/13YZIOU) we have found a very detailed large-scale JPG (i.e. 8 bit only) 10-min exposure image of the sky near Orion containing the Moon. We submitted the image to nova.astrometry.net and received a solution back, including image scale. We took the resulting WCS-equipped image and extracted the profile of the lunar halo in R, G and B and plot these against radius from the estimated disk centre. We have subtracted a sky level for each colour, estimated by eye, and show the profile in the upper panel and repeat it in the lower panel with straight lines fitted: 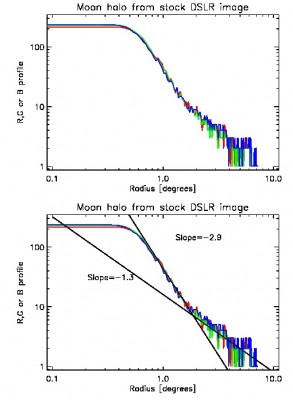 The profiles are saturated out to about half a degree but after that they follow a remarkably similar shape in this log-log plot. Fitting power law functions (1/r^alfa), we may even see some sort of ‘straight line behaviour’ between radius 0.6 and just short of 2 degrees, with another linear trend taking over out until the sky-noise is reached at 4 degrees or so. The slopes are fitted-by-eye only but are -2.9 (near the canonical ‘can-never-be-steeper-than-3’) value, and -1.3.

Before assuming that ‘DSLR RGB imaging’ will solve all our filter problems, let us recall that the VE2 vs other profile differences we have found are subtle; that the above is based on an 8-bit image; that nothing is known about the image treatment performed by the author of that image, and that we do not have data similar to VE2 here – the R channel is not VE2 [ … but read more here link !]. Let us instead try to do something similar with 14-bit RAW images.

Note that the above image was obtained by tracking the sky. Apparently, tracking allowed a long exposure that gave us a wide halo to study. In our own DSLR-On-the-sky wide-field images we have failed to get results similar to the above – exposures were limited to several seconds to avoid overexposure and trailing. Our own MLO telescope images are restricted to the 1/2 degree reach from disc centre.

Note that the above essentially speaks very well for the sort of DSLR optics used – the amount of scattered light near sources must be low or we would not see so steep a PSF! Again, this may be easier to do with a wide-field lens such as used for the above image – trhings may be different with a tele-lens that allowed a closeup of the Moon. The ‘core’ of the PSF should be better investigated, if we can get some of our own images of e.g. Jupiter or bright stars – the above image is VERY wide-field and contains zillions of crowded stars, not likely to give us good point-source PSFs.