The Bias acts up 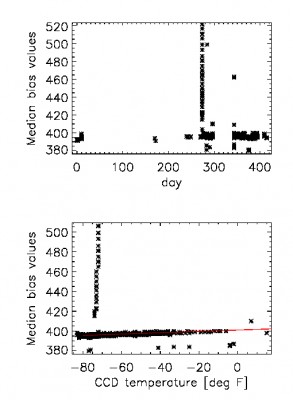 The top panel shows that usually the bias level is near 397 or so, but that excursions have occurred – the plot even omits one point showing a frame with median bias 1028. Near day 270 (JD 2455745 = July 2nd 2011) a very strange event occurs. In the bottom panel we see that that event is unrelated to temperature issues.

The red line, is a fit to the temperature-dependent data – the slope is about 0.067 counts per degrees F, or 0.037 counts/degree C.

The present problems with the camera, showing bias levels near 410 does not seem to strange any more, but we are unshure if the dark current has previously been as strange as it is now.

We note that during the observation of asteroid YU55 we saw what we thought was a strong flat field pattern – but it could not have been that since the dust spots are absent.

Can a flat-field like pattern be generated by high dark current?

One Reply to “The Bias acts up”