Comparison of flats within a single twilight session

I have compared two well-exposed flatfields in the B-filter from the dusk session night JD2455856 with a time difference of about 28.5 minutes.

Each flatfield was bias-subtracted with the proper scaled superbias, had a fitted surface subtracted, and was then normalized. A percent difference image was created as the difference compared to the earlier flatfield.
perc = ((late-early)/early)*100

The diagonal structure does change within a relatively short time-frame and this will result in an uncertainty in the science frames when they are flatfield corrected. So far it doesn’t seem to be a large change, but more investigations are necessary. The more likely explanation for the change is temperature fluctuations. Perhaps it is possible to investigate if the diagonal structure changes with a period comparable to the change in bias level… 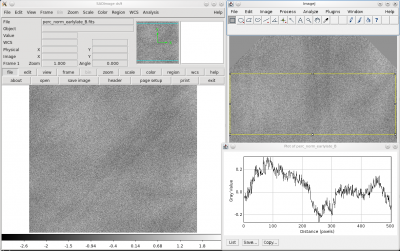 2 Replies to “Comparison of flats within a single twilight session”