The BBSO method was first applied in the standard way – i.e. linear least squares fit to all pixels in 5 degree cones on the sky off the DS disc. Then we fitted to log-intensity, converted the correction into linear values and subtracted from the linear image. The two methods were applied to a patch on the DS disc 2/3rds and 4/5ths from disc center – i.e. close to the rim and not so close to the rim.The figure shows the percentage difference between the cleaned up image and the known value, as a function of the day of month. New Moon is near day 13. The absolute difference is shown but all corrected intensities were larger than the true intensities. 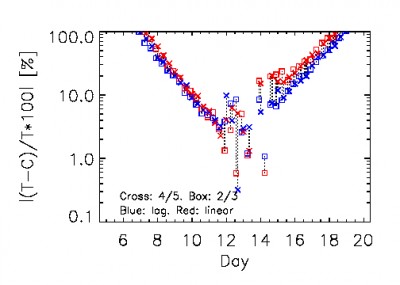 Red symbols show the results for the standard method (i.e. linear regression), blue is for the log-method. Crosses show the results at 4/5ths from disc center and boxes show for 2/3rds from disc centre.We see that results with errors below 10% are available for only about 5 days. We see that the log-method is somewhat better than the linear method, and that best results are found close to the rim.We also see an asymmetry – as thelunar phase passed Half Moon the enalysis switched to the other side of the lunar disc. Apparently a 50% improvement in the derived intensity can be had by using the log-intensity method, but mainly on one side of the Moon. The reason is unclear. As images were generated ideally – i.e. without libration and without distance variations a fixed coordinate for the patches in which the corrected intensity was evaluated always accesses the same pixels in the synethtic image – except when we switch to the other side of the disc after New Moon.