We have commented earlier that for an otherwise well-fitted model image the ‘horns’ or cusps of the fitted image appear relatively too bright compared to middle-of-the-disc pixels. We investigate this now.

For an observed image and the corresponding best-fitted model image we extract certain pixels defined by the incoming and outgoing angle wrt to local normal on the lunar disc and compare the intensities in the observations to those in the model image. Here is an example: 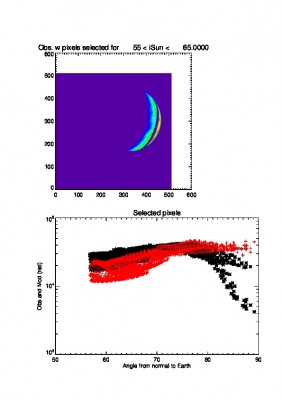 The upper panel shows the observed image with certain pixels picked out (the even dark band along the terminator). These pixels all see the Sun under angles between 55 and 65 degrees wrt the local normal. In the lower panel we show the intensities of those pixels in the observed image (black) and the model image (red) plotted against the angle between local normal and the direction towards the Earth.

If we repeat the above for other sun-angle bands we see the same pattern – model is ‘flat’, observations ‘dip’ when the angle to Earth is large, leaving the cusps always brighter in the model than in the observations.